At ten to six in the evening I arrive at the International Anthony Burgess Foundation to find that the space is all set up for the event, which is expected to start in a matter of minutes, but the crowd consists of a measly few people who are dotted around the room. Within five minutes my row are shuffling restlessly to accommodate a line of cosily squashed bottoms and I turn around to see that the room has packed out. The people sitting next to me resemble what can best be described as MLF junkies - they are buzzing from their last event and ask to borrow my festival guide to remind themselves about which event they are currently seated at! The atmosphere has done a stupendous 360.
The evening kicks off with Lee Brackstone, Creative Director of Faber, talking about the role of the editor in the modern climate of fast-moving digital changes. He is adamant that the editor is still fiercely alive - pointing to the irony of having a panel of editors to discuss the death of the editor - and that the editor remains a necessity even though the times call for some key shifts in his/her responsibilities: "The editor has always supplied the crucial energising force between publishers and book trade - a role which is now up for interrogation. Editors must now serve as more than taste-makers and talent spotters, but participate in creating online spaces for authors. The editor is in need of re-energisation and he will die unless he re-asserts his relevance."
Peter Hartey, founder of Poetic Republic, agrees that the role of the editor is no longer to serve as literary gatekeepers due to the fact that the internet is now used as an open space in which anyone can self-publish and skip over the traditional process for exposure in which a publisher and a retailer are key. Hartey divulges some of the positive aspects to this explosion of digital solutions and social networking platforms, saying that "independent publishing gives a chance to authors previously shut out of the game", and praises Amazon for its facilitating role in giving authors this opportunity. Hartey suggests that editors are not a necessity, posing that if great artists and symphonists do not need editors then why should writers? 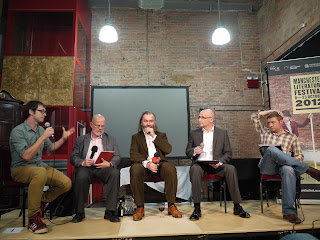 John Mitchinson, co-founder of Unbound, the UK’s first crowd-funded publishing house, also attributes positive outcomes to the digital revolution, saying that it is the most exciting thing to have happened to books since Project Gutenberg. However, Mitchinson’s perspective can be more closely aligned with that of Brackstone than with Hartey’s. He argues that, despite the seeming extinction of the editor’s role in the modern publishing process, "anyone who's ever written will know the importance of the editor. Editors are no longer gatekeepers but they are curators". Hartey retorts that, while editors are generally very capable, they are not capable of acting effectively within the structure of the current publishing world. Hartey sees great value in a more democratic system that attributes power to the reader: "Increasingly, the discovery of books will be driven by reader behaviour and the process of selection will transfer from the editor into the community." He supports the new role required of editors to tap into important structures of exposure online, from Facebook to YouTube.
Michael Schmidt, editorial director of Carcanet Press and PN Review, enters last into the debate, bringing our attention to a problem with the current state of the publishing system in which low-quality books that lack literary endurance can achieve serious success and sell like hotcakes, propelling editors to publish texts for the sake of mass appeal and not necessarily for the sake of great writing. In support of Schmidt’s comment, Hartey says that publishers publish for retail slots, not for readers. In the Q & A, it is an audience member who extends this conversation about who is selecting the books that get made: she questions the true value of an editor who cannot be a neutral party in the selection and editing process and expresses concern over a white, middle-class hold of the industry.
Overall, this was a fascinating evening in which every contributing voice gave real food for thought. Hartey was convincing in his argument that a more open and democratic system of publishing is largely a good thing. Equally, Mitchinson’s assertion that editors are needed today as literary curators in a climate of mass self-publishing struck me as an insightful way of "re-energising" the role of the editor. I left the event pondering the ideas that were raised about the great responsibility and power that an editor carries and feeling excited and frightened at the dizzying rate with which the industry is emerging into a digitally driven environment. What an evening!
Jessie Cohen is an English Literature graduate from the University of Manchester where she is currently doing an MA in Gender, Sexuality and Culture. She writes theatre and film reviews for The Mancunion.
Posted by MLF Blog at 4:54 PM

Thanks very much for the report on an issue which has existed for slightly longer in the music industry.
Like TV before it, and printing before that, the Internet has made culture more democratic and at the same time more demotic.
The big money is in hot cakes, not larks' tongues in a wombat-foetus jus.
Bits need to be got out, preferably ghost-written for a celebrity.
For mass entertainment publishing, the traditional publishing house is now dispensable, and the same may be true even in areas such as scientific publishing where one might have thought rigour and tradition would safeguard essential values. A live, updated database, with all its faults, may be superior to the authoritative tome.
However, the expertise, branding and capital resources of classical publishers seem to be ensuring their survival. The capital resources are important because they allow heavy promotion, the one weapon that unknown e-publishers, including self-publishers, are unlikely to possess. This is comparable to the long-established convention whereby movies are promoted in press and other media through advance interviews and other pieces. The 'underground' promotion afforded by Youtube has the disadvantage of noise and absence of branding.