It’s Saturday night and a small crowd are gathered outside as I approach the door of the International Anthony Burgess Foundation; they’re smoking and waiting for our speaker tonight, the Icelandic author Hallgrimur Helgason.

Hallgrimur is known in the UK most notably for his 1996 novel 101 Reykjavik, which was made into an Icelandic film in 2000. He is very well known in Iceland for writing poetry, prose, theatre plays, journalism, and he is also known also as a painter. Tonight Hallgrimur will talk about his comic thriller novel, The Hitman’s Guide to Housecleaning.

I’ve been in the Engine Room a few times this week. I’m among familiar friends; Anthony Burgess’ furniture which graces the perimeters of the room, the sanguine seats, the staff and volunteers, and of course the audience, who enthusiastically begin to fill up the space around me.

The talk begins. A Hitman’s Guide to Housecleaning is the first book written by Hallgrimur in English. He explains that he wrote this story in English because his translator got tired of him, told him his English was good enough, and that he should just write the book in English himself. This is exactly what Hallgrimur did. The novelist subsequently translated the book into Icelandic for publication in his home country too. Hallgrimur adds that writing the novel in English has given him the opportunity to see what translation is really like. Unfortunately, it’s a process he finds extremely boring. 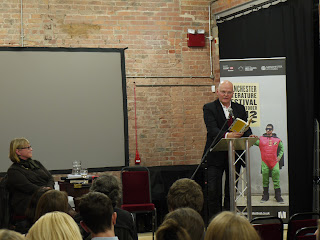 The intriguingly titled The Hitman’s Guide to Housecleaning tells the story of a Croatian hitman, nicknamed Toxic, working in the US. Toxic accidentally kills the wrong guy and must flee New York for Iceland. While at the airport, our anti-hero sees the authorities waiting for him. In a moment of panic, Toxic kills an American TV evangelist named Father David Friendly, then steals his ticket, and assumes his identity.

When Toxic lands in Iceland, an entourage are waiting in the airport for David Friendly, where he’ll be expected to take up the task of preaching on TV. Toxic goes with the family who run the TV station, posing as the priest. A series of comedic episodes follow.

Hallgrimur Helgason explores the traits and beliefs of the religious family surrounding Toxic. The book also takes a deeper look at the Croatian hitman’s mindset. A back story reveals Toxic’s dark past in the Balkan war, and the tragedy of losing people close to him. It’s these traumatic experiences that propel the character into killing and Mafia life, yet, arriving in Iceland, not only is the country the perfect place to hide, it’s also a peaceful setting with the potential to bring about personal change. For example, Toxic discovers there’s no gun crime. There’s not even a store in which to purchase a gun. It’s as though Iceland is sending a message to Toxic; There’s no reason to do bad. You can’t buy guns here and we don’t even have a army. Essentially, the main theme of the novel is centred around a bad person in a good place, and will that person eventually find redemption?

The idea for the story came when Hallgrimur was attending an event in Oslo. On the flight, he was sitting next to a female priest with a rather masculine-sounding name. The priest, who was attending a theological conference in Norway, got up to go to the toilet and left the conference gear next to the Icelandic author. Hallgrimur started to imagine, if this person never came back, how easy it would be to take the name tag and other items and pretend to be someone else.

On settling to write this story in English, and having a character who travels to Iceland for the first time, Hallgrimur explored his home country as foreigner. What was liberating for Hallgrimur was being able to criticise Iceland as an outsider. Conversely, there are many cliches about Iceland he felt he had no option but to use - such as the sun being up for 24 hours at a certain time of the year - because for a foreigner, these would be new things.

Hallgrimur is getting ready to read a passage from the novel set around Eurovision night. Toxic has taken the night off with the family he is staying with to watch the "TV event of the year". The author explains before reading the importance of the song contest in Iceland. "Families get together twice a year," Hallgrimur says, "once for Christmas and again for Eurovision."

After the reading, and the laughs, the audience settle into asking questions. Someone from the audience comments how the translation of Hallgrimur’s previous novel, 101 Reykjavik, is so good, it doesn’t read like a translation at all. Hallgrimur puts this down to being lucky in finding great translators. 101 Reykjavik is the love triangle of Hlynur, his mother and his mother’s girlfriend. There is also the girlfriend’s baby. Hlynur is the biological father, but his mother and her lover announce they will raise the child together. In a strange turn of events, Hlynur is both father and brother to this child and caught in an unsettling Hamlet-esque situation. The gentleman from the audience goes on to ask, if the baby is about 16 years old now, will there be a novel about his adolescent life? Hallgrimur’s eyes light up. That’s a really great idea, he says.

L.J. Spillane has a writing blog at www.ljspillane.com. You can catch her on Twitter at @LJSpillane.

You can read more reviews of these events, by students at the Centre for New Writing, on The Manchester Review.
Posted by MLF Blog at 6:20 PM