Fun for all the family!

It is a rare day today. The sun is hovering over our city and the Manchester Literature Festival have an entire day planned for children to come to the Town Hall and listen to a variety of children’s authors.

This building is another one of Manchester’s fantastic shows of architecture, grand in its structure and a grand place to hold these literature events. Children and adults alike catch themselves looking up in awe at the carved and adorned rooms. We are in a banqueting parlour surrounded by huge paintings of old men, here to listen to the readings throughout the day. It all fits perfectly with the reading of The Kite Princess from our first author, Juliet Clare Bell (preferably Clare). Asking for help from her young audience, four fame-thirsty girls jump onto the stage. Cinnamon Stich, our kite princess, is a princess with a difference. Instead of sticking to her regal expectations, like deportment (walking around with a book on her head), she prefers to cartwheel through puddles and dance with cats covered in fleas, which the four girls demonstrate with youthful elegance, kind of. I don’t want to ruin the ending, as it is a book I would recommend for your little ones, so I’ll say only this. The story is funny; filled with rhymes, illustrations and loads of flyaway kites.

Before Clare starts to read her second book, Don’t Panic Annika, she tells the audience the book is based on her daughter, and asks if we can imagine what her name might be. "Pannicka," one girl shouts out. So close. She brings out bubbles and as she blows them over the captivated children, Clare explains how her ideas are exactly like these magical spheres; they come in plenty, but if she doesn’t write them down in time, they pop and disappear. 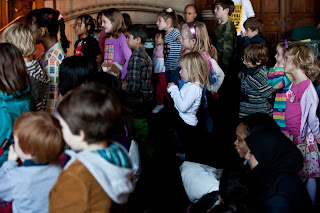 There’s a brief interval between readings and we all herd into the adjoining room where stalls have been set up for us to cut and stick and colour and scribble. A cordial or orange juice gets chugged, then back to the banqueting room to secure a place for the next event; The Lion, The Witch and The Wardrobe. 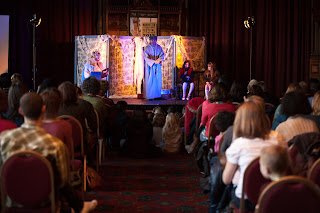 Seating herself on one side of the stage is the wicked White Witch with her servant, called Servant, close by. At the other sits the little girl Lucy. The White Witch explains where she has come from, the land where it’s always winter, but there's never a Christmas. Not a good way to start, as the children turn upon her with their roar of "boooos"! Nevertheless, the Witch remains seated, untharwted by the sons and daughters of Adam, continuing with the story. Children are appointed the role of each of the children in the play, one is Mr Tumnus, another a key holder and another… binoculars holder. I get distracted for a second by a baby on the next aisle blowing raspberries to a family behind her, but I’m reeled quickly back in to the story with the White Witch offering to put Turkish Delight into our Christmas stockings. Who in their right mind would want that in their stocking? Ugh. We don’t have time to read the entire book, but what we have heard today has certainly whetted our curiosity with what will happen to Lucy and her siblings. 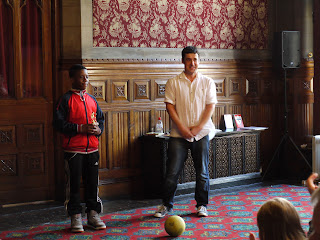 I missed the dinnertime hour with CBeebies presenters Cerrie Burnell and Alex Winters (I was having my dinner, but you can read a report by one of the Festival's Young Digital Reporters here), but I made it back in time for an author I was very curious about. Tom Palmer has written many series based on the theme of football; The Squad, Foul Play and Football Academy are just a few of them. My knowledge of football is zilch, but I wanted to know more about these stories. Tom tells us that he was not into reading when he was younger. His mother knew he liked football, so she told him to read articles about it in the newspaper and magazines. He did, and now he just loves books, which is why he became an author. He now has a dream job where he travels around the world speaking to footballers, getting inspiration for his stories.

The hour will be split into two parts. First half: The Football Reading Game 2012; second half: penalty shoot-out (don’t worry, old building, it’s a sponge ball). Tom’s first question is what type of books/magazines/newspapers do we like reading. Some say sport, others say murder and mystery, one boy says, “adverts about food and sofas”. Tom then begins quizzing us on recent titles of newspaper articles in the sport section. Hands are up and the answers are all correct. I’m feeling like I’ve just flown into the Bermuda Triangle. Discussing what magazines we like to read, he shows us a football magazine called FourFourTwo. Tom asks if we know why the magazine is called this, and I start counting on my fingers how many members should be on a team, when a kid, who is barely past the age of six, shouts, "It’s a formation!" I’m ashamed. Now it’s the turn for our favourite books. The variety is impressive; Roald Dahl, The Hunger Games, first person narratives with present tense, even autobiographies. These kids are on top of their game.

Q&A session now and Tom is answering one boy about his question on where to publish his books. He started small and would send them to our local publishers, Comma Press. When he began to get more confidence, he started working on novels and they were published by Puffin. In response to another question, Tom gives us the title of his next book, A Ghost Stadium, a story about a stadium that is haunted. I’m learning that his books aren’t just about football; there are crime cases, a Russian billionaire murderer and family issues too. Ending this unexpectedly interesting session, Tom offers his tips for writing: write about something you love, read lots and never give up. He puts his books to one side and chooses some members from the audience for a penalty shoot-out.

Today was a great event and it sure proved to be popular with the children and a relief for the adults.

Kevin Danson is an English Literature student at MMU. Read his blog Pebbleddash and follow him on Twitter @pebbleddash.

There's another review of this event on the Bookwitch blog.
Posted by MLF Blog at 4:19 PM