When I first found out that the new poetry collection Rosie Garland would be reading from today, Everything Must Go, is about her experiences of having cancer, I must admit, I was a little apprehensive. I expected a very moving but somewhat sombre and depressing affair, but I couldn’t have been more wrong. Instead, the thing that stood out to me the most was the inspirationally overwhelming sense of positivity exuded by the poet, performer and winner of the Mslexia 2011 novel award. The subject matter didn’t stop the crowds coming in either and Waterstones Deansgate’s event room was full up to the back; extra chairs even needed bringing out at one point.


The collection has a chronological feel, with a beginning, middle and end, something that Garland puts down to the experience of writing her novel, The Palace of Curiosities. The poems are frank and hold no punches but don’t contain a trace of self-pity, and are even at times, as in the case of the final poem, Dignity, really quite amusing. The first poem she reads is called Camouflage and highlights the assumption that we all have when we hear the statistic that one in three people are affected by cancer: the assumption that we must be one of the other two. The next describes the unwillingness of the other patients at the Christie Hospice, which, like Macmillan, she cannot praise enough, to mention the C word, creating an experience that she describes as ‘a bit like a rubbish Butlins’. One poem talks about the annoyance of her hair falling out after chemotherapy and her decision to shave the rest of it off, while another pays a heart-warming tribute to the support and letters of family and friends. 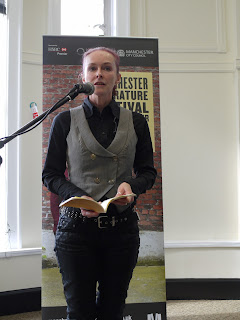 Between reading she comments on the fact that as a result of her throat cancer she is no longer able to produce saliva and has to use a substitute from a tube, some brands of which are made from porcine mucus, following this with a poem called Pig Spit. Another funny poem described a patient who had several packets of cigarettes smuggled into the ward by her son and wheeled her drips out to the carpark 40 times a day to smoke them. Recycling reflects Garland’s decision to join the donors’ register, showing the effect of the illness on her attitude towards life.

After reading a short extract from The Palace of Curiosities, a fin de siècle tale partly narrated by a girl born covered in fur, which sounds to me more than a little bit Angela Carter, there is time for some questions. Some are about life after cancer, but some receive interesting answers about changes in writing style and material post-illness, as well as a modest refusal to be compared to Wordsworth after a question regarding inspiration.

Overall it was a really inspirational and enjoyable experience and I’m certainly glad I was able to see it.

Michael Smaczylo is a gap year student who has just completed his A-levels at Manchester Grammar School and hopes to study English Language and Literature at university next year. He Tweets as @mashsmaczylo.
Posted by MLF Blog at 3:06 PM