To mark this year's National Poetry Day, Carcanet Press took up the Manchester mantel and gathered together various poets for a kind of literary relay in Waterstones' flagship Deansgate store. Taking over the poetry section (the impressive size of which had Andrew McMillan - yes, Ian's son - in raptures) on the quiet first floor, 14 writers spend the afternoon stepping up to the (at times) slightly temperamental mic to present their work, providing a really interesting cross-section of the poetry scene today.

The fun kicks off at midday with two leading figures of the 1960s Leeds School of Poetry: Jeffrey Wainwright followed by Jon Glover, managing editor of Stand magazine, which celebrates its 60th anniversary this year. Who'd've thought? Both Jeffrey and Jon have new collections out with Carcanet (The Reasoner and Glass Is Elastic, respectively), so it's an appropriate way to get the poetry ball rolling. Next on is the aforementioned McMillan Junior, whose second pamphlet, The Moon Is A Supporting Player, is out now on Red Squirrel Pres. He reads us a selection from this, including some of the separately numbered BBC Radio 4 Afternoon Play Ideas series, which I've heard a bit of before and which are clever and funny, and, combined with his anecdotal introductions, really warm the gradually growing audience to him.

There's a brief break before Manchester University's Centre For New Writing Director John McAuliffe and Carcanet staffer Okey Nzelu, plus, later on, Vona Groarke, Peter Sansom and Grevel Lindop, among others, but I'm not able to stay (even poetry lovers have to work sometimes). Not to worry, I make it back for the evening, when the day is rounded off with an appearance by Poet Laureate for Wales Gillian Clarke, presenting her new Carcanet offering, Ice.

Gillian introduces her first poem (both for the evening and in the anthology), Polar, by telling the audience (now a fair size bigger and relocated to Waterstones' rather chilly Fiction Room) all about her childhood in Wales, and her love of nature becomes quickly apparent. The piece, about a bearskin rug, is full of imagery drawn from the natural world and it also reveals another ongoing theme: the bleakness yet beauty of the winter landscape. In Swans, we learn of iced-over rivers and lakes; in Ice Music, Gillian explores the wonder of the sound of solid water; in her tales, we hear of the biggest snowdrifts in Wales finding themselves in Ceredigion, where Gillian lives. 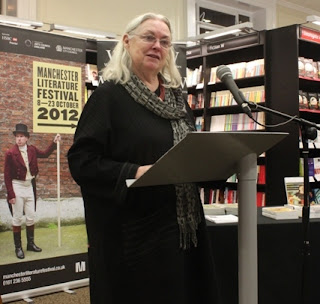 We also learn much about her family and heritage, and even more about the Welsh language and how the culture of the country's people is influenced so heavily by their proximity to the coast. One of my favourite moments is when Gillian introduces the poem Running Away To The Sea - 1955, which she was commissioned to write by one Carol Ann Duffy. It's about feeling free after finally finishing school - apparently because she attended a convent, menfolk were few and far between, and when she invites us to "imagine the excitement when the window cleaner showed up", she has us in stitches.

Sarah-Clare Conlon is a freelance writer, editor and press officer. Her award-winning blog, Words & Fixtures, is about language, literature, arts and culture.
Posted by MLF Blog at 3:23 PM