My wife and I have developed an, admittedly heavily flawed, system of whittling away at our pile of unread books: a book that has been read by either of us moves to the ‘read’ shelves. The system has its benefits. Jo reads all the Ian McEwans and Alexander McCall Smiths so I don’t have to, and I never trouble her with James Joyce or Asterix. The flaw, of course, is that we have got used to a way of thinking, a belief if you will, that a book read by one is a book read by all. In essence we are masquerading as being bibliographically symbiotic when in reality we are just people. Just people.

So I have never read a Pat Barker novel, and for the painfully stupid reason that Jo has read them all so I don’t need to. I shouldn’t be writing this review, really. Jo should. It was her idea to go to the event. I don’t have the requisite background information. I’m just a people. However, as I thought it was top banana, everything should be fine.*

The event was held in the Imperial War Museum North, which was a fitting venue not only because the First World War holds such an important place in Barker’s writing but because, by happy coincidence, the museum’s latest exhibition, Saving Lives, is about medicine and war, and Barker’s new novel, Toby’s Room, is concerned with Queen Mary’s Hospital and the facial reconstruction surgery pioneered there. The exhibition features writings, paintings and artefacts that also feature in the novel. It is certainly worth a visit. It runs until September next year, so you have plenty of time to organise a trip out to Salford. 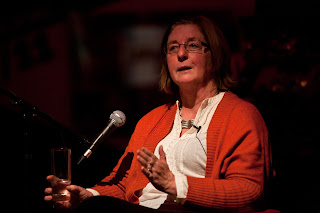 In the passage that Barker read, Kit, a soldier who is wearing a mask to hide his heavily wounded face, meets up with an old friend and visits the bar they used to frequent before the war. I really enjoyed the reading, and realised that I should probably actually read some of Barker’s books. Her prose is clean and her work focused strongly on story, but neither to a degree that stops the writing being interesting in itself. In the question-and-answer session after the reading, she talked about how the writer acts as the five senses of the character they are writing about and how it is the job of the writer not to give an estate agent’s summing-up of a room but instead to work out the one detail the character would notice. Good advice, and it is clear from her writing how well these ideas work in practice.

The detail that stood out most strongly from the reading was the mask that Kit Neville wore; a likeness of Rupert Brooke; a lie that hid an unpalatable truth. What made the reading all the more special was that the Imperial War Museum North building is itself a kind of mask; a smooth metal cover that hides the strange, buckled shape of the main exhibition hall. We were sitting on the surface of the museum’s twisted face**, surrounded by the artefacts of conflict, listening to how those same artefacts, when they were still tools, bullets and blades, could cause so much damage, and to how that damage could be repaired, slowly, painfully, and of the people who suffered that damage. The venue wasn’t just literally but also physically fitting to the subject.

*and yes, I did want to be the first critic to describe a Pat Barker reading as being top banana. But it was top banana so I feel it is a legitimate thing to describe it as such.
**we were actually sitting on very comfortable chairs, but that hasn’t got the same poetry.

Benjamin Judge is a writer and award-winning blogger. Who The Fudge Is Benjamin Judge? was joint winner in the Manchester Blog Awards 2011 in the Best Writing On A Blog category.
Posted by MLF Blog at 1:26 PM