Words and photograph by Liz Gregory.

First of all, a confession. Despite holding a number of qualifications in English Literature and working as an English lecturer for more years than I care to remember, it has taken me a long time to really “get” Charles Dickens. Thankfully I have discovered a modicum of good taste just in time, for this is the bicentennial year of the great man’s birth, an occasion honoured on Saturday at Manchester Literature Festival with an afternoon of talks, workshops and performances at the Mechanics Institute.

Judging by the very healthy turnout for the event, Dickens’ popularity shows no signs of waning in a modern age when we are supposedly all too busy to read anything at all, let alone weighty tomes that meander their way around, almost defiantly, in their own good time. Even more refreshing was the spread of ages in attendance – this is clearly a writer whose work speaks to people of all ages.

The event begins with an entertaining talk by the eminent Michael Slater, Emeritus Professor of Victorian Literature at Birbeck, University of London, and author of a new biography of Dickens, published last year. As you might expect, this is a man who knows his Dickens, and he begins by discussing what we understand by the term Dickensian (and its two very contrasting meanings: a Dickensian Christmas evoking positive ideas while a picture of Dickensian London evokes anything but). For me, the most interesting part of his talk focuses on Dickens’ relationship with his adoring public during his lifetime. While this may have soured after Dickens’ death with the now well-known revelations about his affair with the 17-year-old Ellen Ternan, Slater talks persuasively about how his relationship with his readers was in fact the great love affair of Dickens’ life, culminating in the series of public readings that Dickens delivered to sell-out crowds from 1858 onwards. 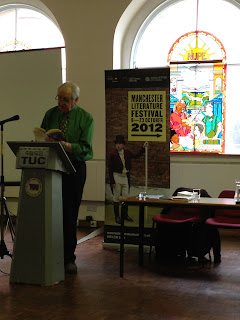 Interestingly, despite this relationship, Dickens apparently believed that a writer’s private life should be exactly that: private. He specifically forbade the raising of any monument in his honour even after his death, and one cannot help thinking what he might have made of this earnest crowd convening yesterday in his honour, particularly as Slater comes on to discuss the Great Charles Dickens Scandal that engulfed him after his death (and also, conveniently, the name of Slater’s latest book). Slater is funny as well as knowledgeable, and it is noticeable that the two books he has brought along are selling very well after his talk; for now, though, we will leave him mid-flow, seen here against the beautiful stained glass of the Mechanics Institute – a fitting location for this event, with much Victorian history of its own.

The next stage of the afternoon requires us to split into three groups and each attend our choice of workshop. I go for Gaynor Arnold’s session on Dickens’ Women, as I have previously read her novel Girl in a Blue Dress – a fictionalised account of the Dickens marriage, told from Catherine’s perspective – and very much enjoyed it. The other offerings sound equally interesting: novelist Ronald Frame talking about bringing Dickens to life (not literally, we hope) and Michael Sanders, Senior Lecturer in 19th Century Writing at the University of Manchester, discussing Dickens’ contemporary appeal. The sessions last for 45 minutes, and I for one could have listened to Arnold talk for much longer about Dickens’ relationships with the various women in his life – she is particularly good on his dutiful but unaffectionate relationship with his mother, and gives us plenty of examples of unfeeling, slightly ridiculous matriarchs in his fiction that may owe more than a little to Elizabeth Dickens. 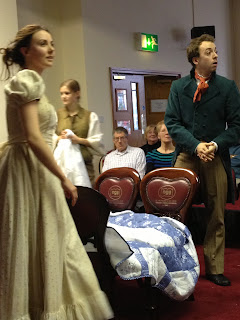 Eventually, the smell of tea lures us all back downstairs and we take a brief pause from all this erudition to consume a brew and a couple of Jammy Dodgers (one hopes the choice of biscuit is a deliberate reference to Oliver Twist, although I fear this may not be so). While we are all hanging round the tea urn, the main room is being reset for the final section of the day: a dramatisation of a Dickens short story To Be Read at Dusk, a ghostly tale brought to life by the enterprising and talented Tea-Break Productions. This works surprisingly well – the actors perform this story-within-a-story down the centre of the room, while the audience watches from both sides: some of those in the front rows find themselves pressed into service as, among other things, various pieces of Parisian architecture and some old family portraits. Just one tiny quibble: the lights in the Mechanics Institute are of the bright, strip-light variety, and hardly conducive to an eerie, ghostly atmosphere; still, this is a small grumble, and even those audience members who look a little sceptical at the start of the 45-minute play are thoroughly enjoying it by the end.

The price for all of this? Just £10, excellent value for such a varied and interesting programme – although that doesn’t take into account the small fortune I spent on books afterwards. Judging by the pile of biographies and novels awaiting my attention on the dining-room table, I’m now a fully paid-up member of the Dickens fan club.

Liz Gregory is an English lecturer and freelance writer, with a monthly column in Writing Magazine and a number of online commitments. She blogs at Things to do in Manchester and can be found on Twitter as @LizJGregory.
Posted by MLF Blog at 6:00 PM

Glad you enjoyed the performance by Tea Break Theatre!

Hope you can attend their next performance featuring the ghost stories told by a good friend of Dickens, Elizabeth Gaskell. The stories will be told from her old house...a house that has been empty a long time, brooding on its memories of people both real and imaginary and not everything is quite as it seems...