Looking around City Library’s Becker Room from my corner spot in the second row, I am presented with 50 faces, some bleary-eyed, some even tearful; all shocked by the intensity of the last hour. Matthew Hollis, poet and shortlist nominee for the Costa Best Biography Award, has just finished speaking.  Hollis’ book, Now All Roads Lead to France, is the tale of Edward Thomas. Thomas remains a fairly unknown and under-appreciated poet, but one whose story is of salvation from suicidal depression through poetry, a remarkable friendship, and an ending that could have been written in a tragedy.

In early 1913, Edward Thomas, while working as a reviewer - a job which he hated due to the lack of creativity and originality in his work - told his friend Walter de la Mare that he had made a ‘special purchase’; an item with which he intended to end his life. Thomas was persuaded to continue living by the impact he knew his actions would inevitably have on his family. His depression continued throughout the year, straining his relationship with his wife, who was so patient with him that she encouraged his feelings of attraction towards the daughter of a friend of his, stressing the importance of his independence; feelings he did not pursue, recognising them as mere consolation.

When, in October 1913, Thomas met the not yet established poet Robert Frost, his life started to turn around. Thomas seemed, to begin with, the only reviewer that recognised Frost’s talent and honesty, while others saw his work as simplistic, and they became such close friends in 1914, described by Frost as ‘their year’, that Frost later referred to Thomas as ‘the only brother I ever had’. In late August that year, when Thomas asked Frost whether he thought that Thomas could put his hand to poetry, Frost told him that his writing already had poetic beauty, just in prose form. In his first five days of writing poetry, Thomas wrote five poems. However, problems began to arise. Late in 1914, Frost fled back to America due to the outbreak of the First World War, taking Thomas’ son with him, in the expectation that Thomas and his family would follow. For the next six months, Thomas struggled with the dilemma of either joining Frost in America to pursue poetry in the knowledge that he had done nothing for the war effort, or signing up to fight in France. 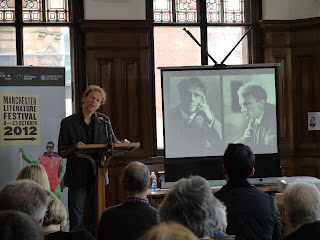 In June 1915 Thomas, so convinced that he would go to America that he had warned his mother about his decision, received a poem from Frost, which was to become one of his most famous. It was called The Road Not Taken. The poem highlighted Thomas’ dilemma, but Thomas’ reaction was not what Frost had expected. Thomas saw the poem as a mockery of his perceived ambivalence towards the war and, though an anti-nationalist who had argued with his father after refusing to condemn the Germans, decided to sign up to fight. It was at this point in the talk that Hollis played an old recording of Frost reading the poem. This was a particularly powerful moment for me, as I was introduced to the poem as an A-level student last year and, at the time, was struck by its beauty, though I was taught only that it was characteristic of Frost’s ambiguity. In the knowledge of its context, the poem has taken on for me a new profundity.

In 1916, after working as a map reading instructor Thomas said goodbye to his family for the last time, telling his wife, “all is well between us for ever and ever”, and travelled to the frontline. While there, he continued to write poems, sending them back to Frost and his wife, and in 1917 he received a newspaper clipping from the Times Literary Supplement including his name, with a highly positive review, among a list of new poets. Frost had carried out his promise and found Thomas a publisher in America. On the day before the Arras offensive began, a shell fell two feet from Thomas, and amazingly, failed to go off, leading to comments that, with his luck, he would never be hurt. The very next day a shell passed so close to Thomas that the rush of air stopped his heart. He died without a wound on his body.

The literary precision of Hollis’ writing, along with his inclusion of old recordings by Frost and Thomas’ wife made for a truly incredible and moving event, which the Literature Festival are going to have trouble beating.


Michael Smaczylo is a gap year student who has just completed his A-levels at Manchester Grammar School and hopes to study English Language and Literature at university next year. He Tweets as @mashsmaczylo.
Posted by MLF Blog at 3:31 PM