The Deansgate bookstore greets a satisfyingly large crowd on Monday evening as Richard and Judy favourite Patrick Gale and Green Carnation Prize winner Catherine Hall sat down with local literary buff and book blogger Simon Savidge to muse on subversion, the British and whether a conventionally linear narrative necessarily makes for a better yarn...

Our nicely structured evening gets off to a gentle but satisfying start as both authors undertake a reading of their latest works. Catherine bravely takes to the podium first with a refreshingly kinky passage from her Green Carnation Prize-winning novel The Proof of Love, superbly evoking the spirit of a classic British summer in the countryside while betraying the touching naivety of her lead character. Patrick provides the perfect contrast to Catherine's subtlety with an engaging dialogue from his latest novel, A Perfectly Good Man. We are thrust even further into our beloved British countryside and are treated to a scene where, as with The Proof of Love, under fairly comic appearances seems to lie the capacity for great innocence and even greater tragedy. Bar the occasional tentative chuckle, the audience is enraptured.

Before handing over to their anxiously waiting fans and with an especially British blend of humility and candor appropriate to the occasion, Simon probes the pair for the answers we have all been waiting for; allowing Catherine the opportunity to reveal the autobiographical nature of her particular tale. As we have all, no doubt, heard many writers/teachers advise in the past: write about what you know. Catherine (pictured below, right) knows the Lake District intimately, having grown up on a sheep farm in the 1970s (her novel is set during the iconic summer of '76). Her father's decision to study mathematics at Oxford before returning to the countryside gave the author and her family a very real feeling of what it means to be 'the outsider'. With a knowledge of the author herself, one inevitably draws parallels between her own sexuality compared with the difficulties her main protagonist faces. As Patrick (below, left) helpfully interjects, it's hard being the 'only gay in the village'. Laughter ensues. 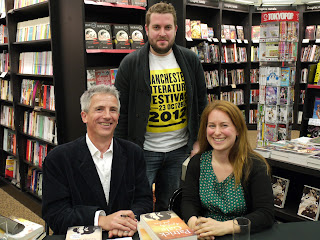 As Catherine discusses the sheer amount of planning that goes into writing such a novel and the difficulties in trying to build up and maintain the sense of mystery she so desires, Patrick himself stresses the arduous task of the 'plotting and plaiting' of a novel and the need for his character to 'feel real'. Confessing his love for discovering the extraordinary among the ordinary aspects of life, he also highlights the importance of his novels maintaining a sense of place, capitalising on English tradition not, he assures us, à la The Archers, rather attempting to weave reality into a fictional tale along with the inevitably more subversive stories.

Within the past 40 minutes, the sizeable crowd has gone through a broad spectrum of emotions; from thoughtful to bemused, from enthralled to hysterical, with spontaneous bursts of laughter and delight at having the opportunity to share their thoughts with two of their most beloved authors - and share they most certainly did!
Lovely Catherine Hall gets the opportunity to look back with her readers and delight them with tales of what her sister apparently calls the 'revenge on the village' as everyone tries desperately to recognise themselves in her accurately drawn characters. As Patrick astutely points out - you can write unsavoury characters with great freedom because the people who inspire them in reality never recognise themselves! Patrick himself then takes to the floor under a barrage of refreshingly candid confessions from one particularly feisty and wonderfully funny fan on the front row - 'Ooooh,' she says, 'I read your book and I thought, this man's really annoying!' With the rest of the audience feeling as though they have stumbled across a private book group meeting, the fan confesses her struggle with 'modern books' and the non-linear narrative found therein. Patrick is delighted. Thanks heavens this lady didn't find his new novel too easy to read because that would really be boring! His aim, he explains, is to write a story that almost becomes more real than reality itself, to express the inner workings of our jumbled modern human minds - one lady chirps up... 'Well, it worked for me!'

It is with great reluctance that a happy and highly bemused audience leaves Catherine and Patrick behind to return to, in their own words, their 'nice but dull' lives in the countryside... mine will be a Pimm's, if you please!

Lucy is a Manchester based blogger and reviewer at Literary Relish and host of the Manchester Book Club.