Ready for your close up

There’s nothing like a Pulitzer Prize-winner to draw in the literary groupies, and so, with Michael Chabon on the bill, it’s no surprise to find the Whitworth Gallery packed with eager fans. Chabon’s novels include The Mysteries of Pittsburgh, Wonder Boys, The Amazing Adventures of Kavalier & Clay (the Pulitzer winner) and The Yiddish Policemen’s Union (which took home Hugo and Nebula awards, among others), and he’s also written short story collections, screenplays and a memoir. Right now, he’s on tour to promote his latest opus, the novel Telegraph Avenue. Tonight’s event is chaired by Manchester’s own Dave Haslam, as part of his Close Up series, which last year brought us Jeffrey Eugenides, and, in 2010, Jonathan Franzen. One giant after the next; will this event live up to its predecessors?

Well, short answer: yes. The venue is suitably full and artistic – David Hockney on the walls, no less – and Chabon is soft-spoken, witty and relaxed; he strolls on, praises Manchester (always a good move) and reads two short sections from Telegraph Avenue – the first couple of pages and a tantalising snippet from later in the book – then chats to Haslam for about half an hour, before answering questions from the crowd. The audience is attentive and appreciative, and Haslam seems genuinely excited to be on stage with his renowned guest. So what do they talk about? 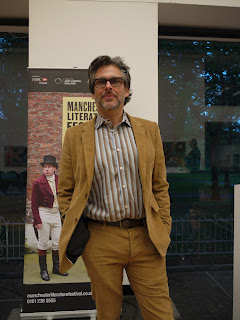 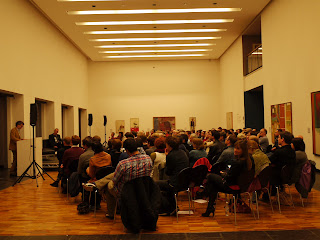 Chabon’s cross-genre tendencies feature heavily in the chat. He’s written alternative histories, literary realism, a campus novel, autobiography and more. Haslam asks if he set out to be eclectic, and Chabon replies that he started to write because he loved to read, and to read widely, but that, earlier in his career, he found he was writing within ‘a fairly limited space’, which didn’t reflect the ‘unlimited’ space of his reading. He’s clearly found his way out of the doldrums, though, saying that now he feels he can claim to write ‘all kinds of things’. Then there’s location: Telegraph Avenue – it’s in the title – is a novel rooted in a sense of place. Chabon tells us about Berkeley and Oakland, California, their histories in US industry, the labour movements and the protests of the 1960s.

This leads us onto a discussion about time, and why Chabon set his story in 2004. The book’s about a record shop under threat from a giant retail store, and Chabon says it needed to be set in a time when that was a realistic scenario, since, now, even the retail giants are crumbling. The fact that the US presidential election and Barack Obama’s first notable public appearances also came that year was fortuitous. He adds that, despite the demise of the shops, he doesn’t see vinyl vanishing; like midwives (which feature in the novel), it will endure. Haslam asks if taking on the voice of a black character was difficult, and Chabon replies that the nature of writing fiction is that you’re always trying to project yourself into another person’s mind. Later, questioned again about Obama’s presence in the book, he talks about the fictionality of public personas: he’s writing a character called Obama, sure, but the ‘real’ Obama we claim to know is an equally fictional character created by a publically constructed narrative.

When it’s the audience’s turn to quiz the writer, we learn that Chabon’s influences include Ford Madox Ford, he’s not fluent in Yiddish, he’d love to write for Doctor Who, and his favourite comic-book characters are what he calls the ‘loser heroes’ – I’m intrigued to hear about Matter Eater, Bouncing Boy and Stone Boy, whose power (turning to stone) renders him unfortunately immobile at crucial moments… He’s asked about John Carter, the hugely hyped and hugely unsuccessful American movie with which he was involved, and he’s pragmatic about it: it was the best Hollywood experience he’s had, he says, and he loved working on it; while it was painful to see it fail, he still likes it. It never tried to be a Terrence Malick flick, he insists; you’ve got to accept things for what they are. One audience member wants to know if there’s anything Chabon wouldn’t dare to try, and he answers that the appeal of writing lies in the challenge, and he wouldn’t like to repeat himself.

Well, we certainly hope he continues to answer that challenge. Excuse me now; I’m off to finish Telegraph Avenue!

Valerie O'Riordan is a Manchester-based writer, and she blogs at Not Exactly True.
Posted by MLF Blog at 2:52 PM