There's a definite buzz in the air in the tall brick-lined room in the old Chorlton Mill. The crowd chats quietly; more than a few commenting on the slightly odd red metal, glass and plywood lift in the corner behind the stage. After a short pause, Iain M Banks is introduced and takes to the stage.

He's slightly taller in person than he appears on sleeve notes; slimmer too. He's also exactly the sort of cheerfully amiable chap the world needs more of. He plucks the microphone from its stand and wanders the stage with the relaxed confidence of a stand-up comedian.

He breaks the ice by warning us that if we don't ask enough questions, he'll go into "self-questioning mode", and proceeds to list a number of FAQs that bring a look of despair to his features... We are left in no doubt that it will be more fun for everyone if we up our game for this session. 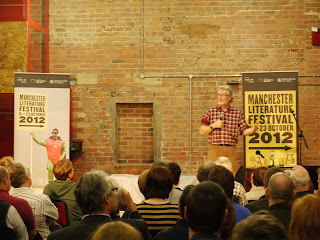 The questions range from accusing the US military of patent violation through to anthropological studies, the nature of a Utopia and how 'Espedair' isn't really an anagram of 'despair'. Banks talks as much about his mainstream fiction and life in general as he does the grand space-opera of his culture novels, and there's no sense of segregation between these.

On Consider Pheblas:
"The brief was to out Star Wars Star Wars."
On The Wasp Factory:
"It's supposed to be a pro-feminist novel, damn it!"
On writing about violence:
"I had to stop shooting pigeons as I was starting to enjoy it."

It also transpires that, in addition to being a prolific novelist, Banks has a musical side: "I've written a symphony... I haven't the faintest idea what key it's in... the first note's a middle C, if that helps?"

Questions seem to come thick and fast and before we're really aware of it, our time is up and a table is brought out for Banks to sign copies of his new book, old books, and pretty much anything else that comes to hand.

All in all, a fun evening and the only complaint is the wish that it could have gone on longer - although that's hardly a complaint!

Guy Garrud is a London based blogger, writer and baker. He blogs at www.guygarrud.com and www.blurrysquirrel.com, and can be found on Twitter @guygarrud.
Posted by MLF Blog at 2:49 PM