A procession of curious attendees, myself included, makes its way into the grand structure of the cathedral, more than happy to shut out a dreary mid-October evening in Manchester. We are greeted by the cathedral’s awesome presence and the hypnotic scent of a place impregnated with candles and incense, burnt ceaselessly throughout the centuries. While those who have read a little about the event can appreciate the appropriateness of the setting, for some there is an overbearing air of intrigue. Gradually the rows of seats fill up, amounting to one great congregation, all conversing in hushed whispers, instilled with a sense of expectancy.

Salley Vickers takes to the podium, following an impressive introduction by the festival team, who introduce the new novel The Cleaner of Chartres and highlight Salley’s extensive life experiences. Working in a plethora of jobs: as a cleaner, dancer, artist’s model, teacher, university lecturer of literature and a psychoanalyst - this more than qualifies her with a writer’s background, they rightly say. To date she has had six novels published, including bestseller Miss Garnet’s Angel.

The talk begins with forthright honesty as Salley explains her predicament: “I hope that perhaps some of you will have read some of my books, but unlike you I’ve read none of them.” This bold statement is greeted with amusement, yet she goes on to explain that it is unusual for authors to go back and read their finished work and the frustrating side effect for her is that she won’t know exactly what each book is about. So it is with this confession that she chooses to launch into her own personal experiences as a writer, which we listen to with rapt attention. For not only is this a fresh, alternative journey into an author’s work, it is also clear that here stands a woman who can really tell a tale.

She relates how Miss Garnet’s Angel owes its origin to her getting lost in Venice after a visit to St Paul’s Basilica, whereupon she stumbled upon a dilapidated church. She recounts a somewhat “sinister, humpbacked figure shuffling towards her out of the gloom, stretching out his hand in a plea for money”. Upon her giving him some coins, he “immediately took my hand and led me to the front of the church and there he showed me a set of strange paintings: a boy, a dog, a fish and an angel”. This experience, she says, sparked her fascination with the notion that “all the time we’re living with and recreating and reinterpreting the past”, for it was only upon another visit to Venice many years later, that she again unwittingly found herself in front of the same church, with the same sinister figure, who again showed her the set of paintings. Only this time they were familiar and wrought with meaning, she having since read the Apocrypha and the Book of Tobit, from which they were derived. She immediately began writing Miss Garnet’s Angel, a novel that has Venice and the Book of Tobit as its setting, touching upon the idea of the past recreated. 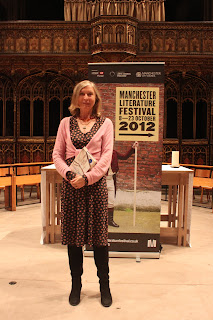 In this way, it becomes increasingly evident that Salley’s novels are eloquently wrought from her own psychological intrigues and fascinations. The idea for her latest novel arose after a similar experience gripped her imagination. A short stop, turned lengthy sojourn, in Chartres, found her in the cathedral she had visited several times before. She recounts seeing a figure busily cleaning, and thinking: “What a wonderful job”, for it struck her that this woman would see the cathedral in a way no one else would, with a special degree of intimacy. Salley’s ability to convey a resonance and depth of meaning to human experience is profound, and the audience sits transfixed as she likens this to a time where she really saw Caravaggio’s paintings for the first time, appreciating them, after years of private dismissal. The characters and places in The Cleaner of Chartres are influenced by this very idea, of an inner presence which cannot be known upon first experience.

It seems fitting that the readings are delivered at this time, now we have a deeper understanding of the driving forces behind her prose. The cathedral setting works its spell, allowing us to vividly picture each passage as it is read out. Salley’s voice flows naturally and unencumbered, in reverential tones: scenes of fire at the cathedral of Chartres, the renovation overseen by the town’s curious residents and the mysterious cleaner quietly working her way between the pews.

There is just time for a Q&A session, when Salley warmly welcomes observations about her work. One particularly insightful observation pin-points a theme of “getting lost” running through her work – from being lost in Venice, to the labyrinth at the heart of the cathedral in Chartres, the different time periods breaking up her novels and the inner turmoil of characters. Salley perfectly concludes the evening, suggesting that through letting go or losing oneself in a place and clearing one’s mind, we can start to see things anew and things begin to make sense, which she understands is an important thread running through, not only her novels, but through the creative experiences she has related to us.

Upon stepping back out of the cathedral, the sharply contrasting rain-swept streets of a northern city allow these last words to resonate as it appears that we were indeed lost in Venice, Chartres, anywhere but Manchester, for some time…

R. J. Owens is a Manchester-based writer and editor. She has written reviews for All About Audiences and worked as a features editor for blankpages.

You can read more reviews of this event, by students at the Centre for New Writing, on The Manchester Review.
Posted by MLF Blog at 3:03 PM