The dogs and the horses

It’s been Clare Balding’s year. She admits as much, as she wraps the audience at the Royal Exchange around her finger, unbesmirched this afternoon by trademark highlighter. Over the course of  2012, she’s completed the transition from being the ‘token woman’ at the trackside (her words, both self-deprecating and uncharacteristically pointed) to unalloyed National Treasure.

Ostensibly, she’s dozed her way up from Euston to promote her partial autobiography, My Animals And Other Family, and she reads from it rather well, suggesting a facility for the written word in general, and comic prose in particular, that pleasantly surprises. Hers, however, is a very soft sell. (For the record, the book tells her life story animal by animal, dog by horse, a device that highlights the relative importance of Clare and her younger brother in her father’s eyes, but that also seems latent with the swifter mortality of those animals, and the losses they inevitably bring.) 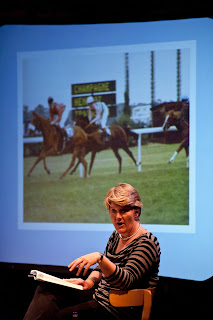 Indeed, the most gentle of sales pitches is all that’s required, because this is her audience, representatives of a certain kind of England; an Albion that likes to believe that the Olympics really have brought people together, a decent, sporting, deferentialnation, that might cheek a princess, but never question her right to that title. Which is not to be mean-spirited, because, in very many respects, to be mean-spirited is to miss the point.

A different memoir might have dwelled on the hurt of being second best in family life to a racehorse, or the angst of failing to find a place in the boarding school pecking order, but such indulgences are not long entertained. For me, her most telling anecdote was not about her peer pressure shoplifting, nor about breakfast tomfoolery with the sovereign, but her reflections on mocking jockey Liam Treadwell’s teeth. This, the ensuing complaints emphasised, made people uncomfortable, and upsetting people was anathema to the kind of broadcaster she wanted to be; it was not the done thing. 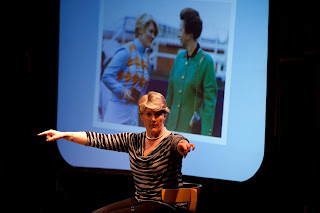 And, in an odd sort of way, this, I think, is at the heart of Ms Balding’s ascent to the status of a Treasure; she embodies a kind of hard-working play-the-game self-mocking Mallory Towers decency that is easy to satirise, but hard to deprecate. It finds its male counterpart in the similarly prized Mr Fry, right down to the humanising adolescent experiments in theft.

As I leave, rather less cynically than I entered, Clare Balding is – of course – being as good as her word; signing books I no longer suspect of being ghost-written, sparing a minute or two for all in her constituency, every jot as cosy and decent as high tea at The Midland. And who would turn their nose up at that?

Desmond Bullen is working diligently towards his next rejection letter from the BBC.
Posted by MLF Blog at 5:09 PM

She is the Lovely Clare Balding call her by her proper name.