“We don’t write about suburbia,” says author Stuart Evers midway through the fascinating Q&A at the Northern Debuts event on the opening day of the Manchester Literature Festival, “unless it’s about Agas.” His novel, If This Is Home, splits its time between Las Vegas and a semi-fictionalised version of Cheshire town Congleton, dubbed Nongleton by Evers. Evers is reading alongside two other debut novelists from the North – AT Boyle and Sophie Coulombeau. The three of them have notably chosen to set their debuts in the towns they grew up in, or at least some version of these places.

AT Boyle’s debut novel From Pakistan To Preston is set in the Northern city during the 1970s Preston Guild and focuses on a love story between two characters, who both feature as narrators. This dual aspect to the novel is appropriate since AT Boyle is a pseudonym for author Alison Boyle and her father. Alison discusses a love of Dickens that initially inspired the tale, and his use of narrative and perspective in his novels that gave From Pakistan its unusual structure.

Young novelist Sophie Coulombeau also has an unusual structure to her debut novel, Rites, which is set in Manchester. Published by Route Publishing, Rites is the story of four teenagers who make a pact to lose their virginity then it all goes horribly wrong. The story is told from 11 (11!) different perspectives, and Sophie is keen to point out that while the novel has been considered many different things and reviewed as many different types of book, in her eyes it is clearly a story about confessing. “Each voice can be seen as a confession of sorts,” she says. The story itself is “a meditation on confession”, she explains before reading a brilliant passage in which one of the 11 main characters outlines this. 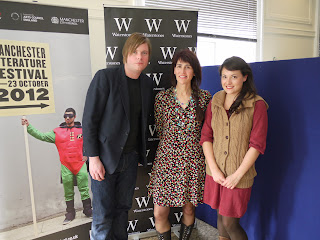 What is most interesting about these three novelists are the similarities in their novels. From the Northern setting, to the coming-of-age stories within, to, most notably, the interesting use of various viewpoints and different perspectives. Evers' novel, If This Is Home, only has one character, but he has three different identities and the story switches between them. Evers says of his reasoning, “humanity’s ability to self-deceive is one of its most interesting facets”.

Where the differences lie in the authors is their history as writers. Alison Boyle is a noted children’s author, Stuart Evers' collection of short stories, Ten Stories About Smoking, was described by the Guardian as “observant and understated”, while Sophie Coulombeau has had short fiction published in various places and Rites itself was awarded the Next Great Novelist Award 2012.

As she introduces the authors, Festival Director Cathy Bolton says that it is refreshing to see this focus on the North and a promotion of the region within literature. From the strength of these novelists, it’s more refreshing to see three authors you should definitely keep your eye out for in the future.

Daniel Carpenter is a writer and one of the organisers of the monthly spoken word event Bad Language.
Posted by MLF Blog at 6:32 PM