I am back in the Portico Library this evening, but rather than a tour about Dickens (there’s a Dickens connection nevertheless), I now join Gaynor Arnold for a reading and discussion of her new book, After Such Kindness. Arnold’s novel examines the relationship between the author Lewis Carroll (whose actual name is Charles Lutwidge Dodgson) and Alice Liddell, through the fictionalised characters of Daisy (Alice) and the Reverend John Jameson (Lewis Caroll/CD).

Jon Atkin from the Festival introduces Gaynor, though disappointingly not in the Victorian outfit he can be seen wearing on the poster for this year’s MLF, to which he jokingly refers. He comments that this has been a very Victorian-themed day and the Portico is an appropriately Victorian setting. We are surrounded by wall-to-wall shelves of hardback books, and I am half expecting to see Charles Dickens and Charles Dodgson sittingsmoking a cigar and reading some Polite Literature.

Gaynor, who is well spoken and immediately engages the audience’s attention, describes her career, noting that she was a social worker in the field of child protection, which connects to her interest in the novel and the choice of subject matter. Her previous and first novel, Girl in a Blue Dress, is similar in that it is set in the Victorian era fusing fact and fiction, but that novel examined the relationship between Dickens and his wife, Catherine, in the guise of Alfred and Dorothea. Gaynor’s talk describes the germination of the idea for After Such Kindness: her publisher was initially keen to replicate the success of her first Victorian novel, but she was also interested in exploring the idea of a child in Victorian society, and, in particular a child who forms a friendship with an older man. Gaynor also gives us a flavour of the novel’s style and plot, and the questions it raises about such relationships. 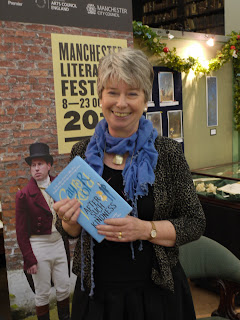 She sets the scene, telling the audience that the Reverend John Jameson, also a university Don, has developed a friendship with Daniel Baxter, the father of Daisy. Jameson meets Daisy and is immediately taken with her. The excerpt she reads is just after the Baxters have felt compelled to sack the nursemaid, Netty, for her role in an accident on Daisy’s birthday (Gaynor cleverly refuses to tell us more, so as not to spoil the surprise for those who will read the book). The extract is a conversation between Daisy and Jameson as they walk around the garden of Daisy’s home. Gaynor uses a child-like voice to distinguish Daisy’s speech from that of Jameson’s. I feel slightly uncomfortable during and after the reading, simply because the dialogue has undertones of an ‘inappropriate’ relationship developing. But, I am, like others in the audience, I suspect, slightly anachronistic in placing myself in Victorian society and judging the relationship according to today’s standards.

Where do you draw the line? That is a question that seems on the lips of every member of the audience now as Gaynor hands it over to us to ask what we will. As you might expect, difficult topics arise about Lewis Caroll and his relationship with Alice. Was Gaynor sympathetic to Lewis Carol? I am keen to hear what she has to say on this. Gaynor says that in life things are not black and white, and I know that she is clearly right about that. Gaynor and the audience both theorise about what may/may not have been going on through the mind of Charles Dodgson at the time - could it be he preferred the company of young girls because of his stammer when speaking with adults? Perhaps he just didn’t like sex and was asexual? Or maybe there was something creepy and sinister in his relationship with Alice?

But, as Gaynor reminds us, this is fiction and the book is a novel, after all, and it’s also enjoyable and funny - we should read it! Indeed, Gaynor, I think I might just do that.

Leona Bashow is a lawyer, but also having a degree in English literature and History, reads widely in her spare time, from science fiction to the classics.
Posted by MLF Blog at 7:24 PM