It had been a hectic day at Uni – what day isn’t hectic? – the evening I went to see Carol Ann Duffy and LiTTLe MACHiNe at Manchester Town Hall. My mind was buzzing with ideas and thoughts and plans and worries and Spanish verse and French grammar as I weaved my way down to the Town Hall in the early evening.
Never before had I been inside. It’s grander than I had ever imagined, and so, so beautiful. I had thought you would have to travel to Europe to see such Gothic splendour. It is also very easy to get lost in! I found my way eventually, and got a front row near-centre seat. The room we were in was very beautiful and reminded me of a church and I sat for a while being archeologically enlightened.

I must admit, when Carol Ann Duffy walked past me - her, really here - I was awestruck. I spent my GCSE years poring over her poems, pondering every word, every line, every little bit of meaning and emotion behind the verse. I became a Carol Ann Duffy fan - in fact I would probably say she is my favourite contemporary poet - so seeing her in person was fairly amazing. She was wearing a red necklace and earrings that glittered so brightly in the light. She looked beautiful and wise, and is certainly a figure of authority. You would not want to get on the wrong side of Ms Duffy.

She introduced herself, and her guests LiTTLe MACHiNe, a band that puts poetry to music. Carol Ann announced that she would read some new poems from her recent collection The Bees, as well as, to my delight, some of her older poems. I wondered if any of my favourites would feature. None did, but it doesn’t matter because I now have many new ones. Everything she reads, she reads carefully, thoughtfully, expressively. She can make a poem humorous, dramatic, sad… She can be so persuasive; conveying a real sense of warning and urgency; for example, her poem The Human Bee, which is about the threats facing bees today, made me want to jump up and go and do something, anything, to save our bees! She also read a selection of poems from her collection The World’s Wife, which looks at the lesser-known wife or other female relation of famous figures such as Faust, Midas and Charles Darwin. These poems are very narrative and often funny. However, I also enjoyed the more emotional poems; Rings, the poem she wrote for the wedding of Prince William and Kate Middleton, was especially moving.

The anecdote explaining each poem was invaluable – it meant you could see the poem through the poet’s eyes, as well as hearing your own interpretation of the verse. I was especially pleased that she gave her view on the situation surrounding Education for Leisure, her poem which was removed from the GCSE syllabus for supposedly advocating knife crime. I was one of the school year who studied it in great depth for our exam and then were told we wouldn’t be studying it any more, and I thought the whole situation was ludicrous. I was really intrigued by that poem, and would have liked the chance to answer on it in my exam. 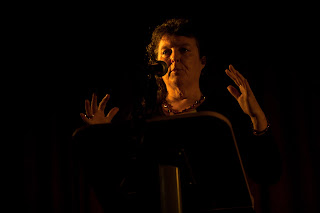 After Carol Ann finished her set to the same adoring – and deserved – applause that had followed every poem she performed, LiTTLe MACHiNe took the stage. I really did not know what to expect with Little Machine – all I knew is that they put poems to music, and their new album is called Madam Life. They were very dynamic, and played well, and the performance certainly brought to my attention several poems, from various times throughout history, that I hadn’t known that well if at all, so I am grateful to them for that. Their version of The Poet Offers His Wares was particularly memorable, and now I won't think of that poem without their performance coming to mind.

The highlight for me was their version of Mean Time by Carol Ann Duffy herself; I thought it was beautiful and has made a poem I liked into a poem I really love. I must say that some of LiTTLe MACHiNe’s riffs to which they set the poems were very similar to one another – I would have liked for each poem to have had a distinct sound of its own. But I can’t deny that I enjoyed their performance, and it was certainly a new and imaginative way of interpreting poetry.

Afterwards I combed the contents pages of all the Carol Ann Duffy books for sale outside and finally found what I was looking for in the anthology Mean Time – and bought the book. I then got Carol Ann to sign under my favourite of her poems – Before You Were Mine, a love poem to her mother that we studied at GCSE and that I have always been very fond of.

As I walked back through the Town Hall, dazed at having met Carol Ann Duffy and having a signed book by her, I noticed all the bees on the ground, the Manchester bees, and I thought how apt it is that Carol Ann has been inspired hugely by bees and said many other poets had been before her. Maybe, living in Manchester, she was inspired by these particular bees as well… Surely one of the main aims of the Manchester Literature Festival is to inspire, and I think it’s safe to say that the talent and wisdom of Carol Ann Duffy has and always will inspire me.

Throughout the Festival in 2012 we will be working with a group of young people to support them to become digital reporters, and to document a range of events from their perspective. As well as writing blogs and reviews, the young digital reporters will respond to our events using other methods such as photography, illustration and radio. We are really excited to see how our young reporters get on and hope that you will enjoy reading, listening to and watching their work.
Posted by MLF Blog at 5:26 PM