Broadcaster Sue MacGregor might now be known for The Reunion, but her Radio 4 career started with Woman's Hour, which she helmed, prior to Jenni Murray, between 1972 and 1987, and also the Today Programme. She's here this afternoon, however, to talk about books, having been the presenter of A Good Read for many years. "I probably read about 500 books for the programme," she says, "I made a lot of happy discoveries." Seems she is well placed to answer Time To Read coordinator Jane Mathieson's questions, then! 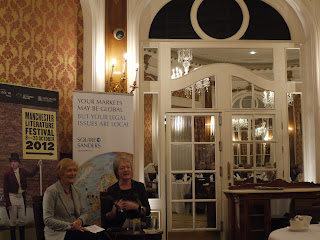 Sue has always been an avid reader and, equally, an avid interviewer of writers, and she has spoken on air to many iconic literary figures, from Doris Lesssing - "Very terrifying but a great speaker" - to Dame Rebecca West - "Extremely terrifying... I mean, she had been the mistress of HG Wells!" Indeed, one of the things that comes across is that she does seem to quite like to gossip, often lowering her voice conspiratorially and telling lovely little side stories and interesting facts about people who have crossed her path. Perhaps it's because she's in a room full, mostly, of women of a similar age (there are only three "mere males", as she says - apparently the phrase used by men writing into Woman's Hour). She got one of her first BBC gigs by brazenly knocking on Enid Blyton's door and managing to get her to answer some questions into a mic. "She was with her third husband," says Sue. "She was quite a racy lady!" 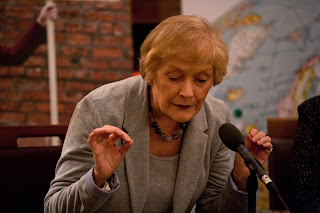 Aware that the audience is patiently chomping at the bit for The Midland's famous tea and scones ("Apparently you've got to sit through me first," she'd said apologetically at the top of the hour), Sue takes some questions from the floor, then lets us get on with the tinkling of spoons and knives on pots. "If you could interview any writer, alive or dead, who would it be?" is met with a comprehensive list: "Well, there's three at this festival! Pat Barker - a most wonderful woman who's written a wonderful trilogy; Iain Banks - I've never met him and I'd love to because The Wasp Factory cropped up on A Good Read and I really liked it; and Penelope Lively."

Then: "I'd love to interview Barack Obama - as long as Michelle was allowed to come along as well!" I think it's true to say that Sue MacGregor is a woman's woman.

Sarah-Clare Conlon is a freelance writer, editor and press officer. Her award-winning blog, Words & Fixtures, is about language, literature, arts and culture.
Posted by MLF Blog at 6:19 PM