Amiri Baraka never simply reads his poems. He scats, sings, taps on the podium and sometimes  fidgets while keeping on beat. It was fitting that Young Identity, the ensemble commissioned to respond to his latest works, structured themselves as monologue voices encircled by an ever-present chorus reflecting that beat. Their piece named Entitlement ran through the modern-day strife of questions, including identity and politics to the more ancient but ever prevalent torments of oppression, evil and  ignorance. So interwoven was their tale that in the midst of the set, they attempt to answer a question posed in Baraka's poem Someone Blew Up America. "It was me," says a character again and again in answer to the question posed in the poem: who is the real terrorist? But  this is not the truth, as with dawning realisation, it becomes clear that the character is not the culprit but is being blamed due to the colour of their skin.
Interviewer for the night Corinne Fowler, lecturer at the University of Leicester, introduces the author and describes what critics have said about him. Arnold Rampersad named him one of the eight figures to have significantly affected African American literary culture. Vangelisti calls him a "literary establishment positioned between academism and the entertainment industry". Baraka is admired for his creative and daring approach to the idea of using literature for consciousness raising. However, it is not until the author tells stories from his youth that some of the other phrases used to describe his work - panoramic quality / historical horizon - are fully understood.

'I was in Alabama one time, where they had run my grandfather out of town. I was just learning to read as a child and I was reading the signs in the store. Lucky Strike means fine tobacco, it said. The merchant came round and said some folks talk too plain. My mother grabbed my hand and jerked me out of there but I understood what he was saying. The merchant was offended by the fact that I could read.' In a harrowing tale of his youth his grandmother describes a man accused of raping a white woman being dragged into the middle of town and his testicles being cut off. These experiences form the backbone of how his family transmitted knowledge about what social civility was and wasn't and reflects the 'long memory' seen in his work. 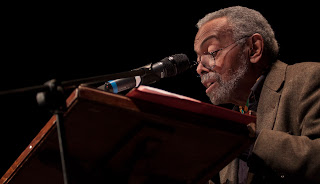 His memory accumulated the rise of black power and the assignation of its leaders but not before bouncing with the Beat Generation or, as he puts it, later becoming wary of bohemians who grew beards and did not get involved in politics directly.

Controversy lies easily with Baraka and, now in his stride, he answers a question about the arts being seen as a luxury in the public funding cuts. 'The arts are expendable because the arts will teach you to fight against oppression. The reason they cut it is because they don't want people to think. They don't want you to know anything.'

In the final section of the evening, Amiri Baraka performs his poetry. Tapping a soundtrack on the podium to set the mood, his first poem is on Africa. 'At the bottom of the ocean is a railroad made of human bones.' Midway he sings the chorus to the old spiritual, Wade in the Water. His poem Heathens creates guffaws as both phrasing and melody illuminates the text. Something in the Way of Things (In Town) is both haunting and episodic.

The dead guy you saw me talking to is your boss
I tried to put a spell on him but his spirit is illiterate.

In the final poem of the evening he reads his latest and perhaps most controversial poem, Someone Blew Up America. In a virtuoso display of the rhetorical question, the audience is asked again and again Who, Who, Who? Who is this someone? Who is the real terrorist?

Amiri Baraka quotes another poet who said the only thing a poet needs to worry about is truth and beauty. But what is a poet to do when ugly is in power and truth can get you killed? A cake is presented to celebrate the iconic figure's 78th birthday, which was last Sunday.

Reina Yaidoo is a writer and  entrepreneur. She runs her company Yaidoo Ltd in Manchester.
Posted by MLF Blog at 2:12 PM