It’s that time of year again for the winner of the annual Manchester Writing Competition, in partnership with Manchester Literature Festival, to be announced. This year it’s the poetry prize, which is why I’m here at Chetham’s School of Music. It is, weirdly, a warm October night, which reflects the atmosphere inside this small medieval chamber where a small soirée are gathering before the gala occasion.

As we take take our places in the olde Baronial Hall, a perfect atmosphere to hold the ceremony, I doubt I’m the only feeling like I’ve just entered the set of Merlin, or perhaps waiting for Dumbledore to call me into his office. Matthew Frost, a member of Manchester Literature Festival’s board, and his impressive moustache, open the ceremony with a curious speech of orbs, golden rods and shiny batons, all very magnificent. Joint hosting the event with Matthew this evening is co-director of Manchester Children’s Book Festival and manager of The Manchester Writing School, James Draper, dapper as always. With no chairs left empty, the number of people attending is cosy, friendly and a tad anxious.

James quickly goes over how the competition was judged. With over 1,500 entries, the highest number ever received, the collections of between three and five poems (120 lines max) were seen by the judges without the knowledge of authors’ name, age, sex or location. Pieces were judged on the quality of writing alone; complete anonymity. 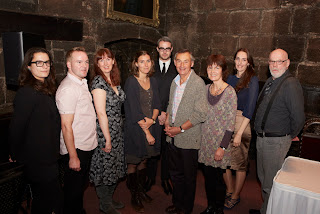 Before we hear the six finalists read some of their work, the panel of judges, Ian Duhig, Frances Leviston and Adam O’Riordan, treat us to some of theirs. Ian is to start and comes on stage sporting a very nice pair of braces. A series of religious-themed poetry is read, though not your expected conservative type. Here are a couple of lines that make me chuckle: "A face like a half-boiled turnip", apparently an Irish compliment, and my favourite, "My wife doesn’t like it when you watch her go to the toilet". Frances is up next. Countering Ian’s light-heartedness, we are plunged into some "heavy relief" with The Historical Voice, yet we are spellbound with the cliffhanger of each syllable she pronounces in this now, incredibly quiet room. Frances has enjoyed being a judge in this year’s competition, and has had pleasure in reading so many different entries from a variety of countries. A Shrunken Head is a poem she wrote as, "a rendition and patriation of dead people", whose bodies are transported and reconstructed in museums then displayed in cases to the public in clothes like "The leather-thonged moth-kissed costume of an Eskimo". Adam O’Riordan, always debonair, closes the judges’ readings with a vivid poem of industrial Manchester, "Queen of the cotton cities" with "your urchins, little merchants" walking through the smoggy streets. From industrial to digital, he reads Google, a poem of men sat at computers, with never-ending nights and fingers that never stop (I think this is about me). He finishes with a mixture of food poems, alluring us with descriptions of that memorable first sip of a cocktail and how, "it lays like a four-letter word in my gullet". It begs a moment of silence.

Now over to the finalists and first is Fiona Benson, whose poem, Still Life With Red Herrings, has the same effect as Frances’; concentrated silence. The first line fixes my attention, "Paris, and you spend too much time with the whores". When it ends, I still have the resounding assonance from the line, "the labial gleam of scales, their gills’ slashed silk, their lice", pleasantly slithering round my mind. Second is Jane McKie, a creative writing tutor at the University of Edinburgh. Sunrise Over Lunan Bay is what we listen to, and like any good poem, there’s that line that sticks: "The sun struggles to get up, I applaud the effort". Sounds like the usual Monday to Sunday. Abigail Parry follows Jane and takes us through her poem, The Knife Game, which involves a hand, a knife and a lot of guts. We hear the digits’ journey through the attacks and then it’s revealed, "I eat my meals in forkfuls. My left hand / Inert, potato-eyed - lies in my lap". Ouch. Fourth up Chris Preddle. Misshapen is the poem he has chosen to read and it’s something I know more about: trees. Unfortunately it ends there, as I hear words I know, but I feel there is something to be dug out from underneath them which I just can’t get to. He has gotten this far though, so I’ll put it down to my shabby brain.

Only two more to go and the penultimate finalist is Anthony Roland, teacher of Literature and Creative Writing at The University of Salford. He reads The Siege of Minorca and I’ve just come to the conclusion that I lack a certain degree of verbal synthesis. His words are beautiful when spoken, but their meanings, to me, are on the same level as those from Carroll’s Jabberwocky. Still, I manage to capture his final line with morbid gusto: "Dim torches cast my death in momentary snow". Emily Wills is our last reader of the night and launches into The Breaker, a poem which follows the crashing of waves with words that have likable sounds yet contrasting imagery: "You might as well be bladderwrack, / or wreck or whiteboned cuttlefish … this vertigo dull green and white of somersaulting light".

Before the winner is announced, Adam tells us how smoothly the selection process went among the judges and how the finalists came in a clear, natural and unanimous decision. Without any hesitation, James is pulling out a golden envelope from his jacket. In one breath the winner is declared, Anthony Roland. This is the first time for a local resident to be named winner of the competition, and certainly a proud moment for us all within the Manchester region. 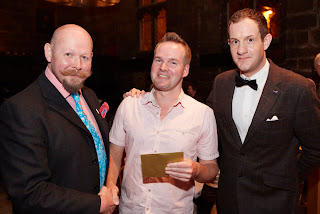 An excellent venue, a smashing event and outstanding poetry. It has been a wonderful night. You can read the finalists’ submitted collections to the competition here and find out more about The Manchester Writing Competition 2013 here.

Kevin Danson is an English Literature student at MMU. Read his blog Pebbleddash and follow him on Twitter @pebbleddash.
Posted by MLF Blog at 4:56 PM