All part of the progress

Perhaps it was his prior ignorance of David Hockney and the trepidation he felt in responding to the artist’s work through poetry that sparked a nervous excitement when Kei Miller introduced his new commission. He shared immediately: this was the first time he had responded to visual art in this way. Before an audience admittedly more knowledgeable than himself, the poet admitted his wariness. Yet despite a complete lack of previous engagement with the artist and a subsequent concern, which I suspect haunted him throughout months of preparation, I became convinced of Miller’s deep and inextricable connection with David Hockney.

By composing open letters describing his own journey at the rate of Hockney’s ‘rake’, the artists were aligned as if penfriends, their unapparent similarities became exposed as they seemed to rival each other’s curiosity and lust for experience. In the same way Hockney transformed Hogarth’s engravings into something historically, socially and geographically relevant to the 1960s, Miller creates a storyboard through his numbered letters depicting further transformation and providing a practical resurrection of the work. By not only weaving the progression of himself as a poet but the movement of society and technology in the 21st century into Hockney’s work, Miller manages to reinvigorate the conversation he admired Hockney for initiating for a contemporary audience. 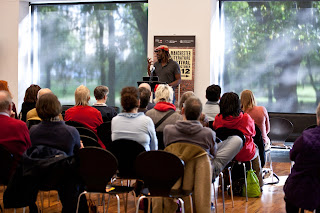 Instead of inheriting a family fortune or winning a generous art prize, Miller’s rake must sell his Honda so he can afford to live the life of a writer. The prevalence of symbolism and strangeness in Hogarth and Hockney’s prints is echoed in Miller’s modern landscapes: Jamaica, where the hill he lived beside collapsed, and England, where people warrant unnecessary politeness in response to the bombing of its capital. This is a landscape Miller understands well and between the reading of two of his letters he mentions how Hockney’s final dystopian print Bedlam reminds him of the general public, commuting through life with iPods, earphones and headsets oblivious to everything: "We are so plugged in," he realises. There is a tension as the poem moves and a volta of sorts – the planes that would take Kei between England and Jamaica, the car that he would sell to set him free as an artist are juxtaposed with the London Underground which explodes and another car which burns down to its tyres.

The poet is unambiguous at times in how he is responding to Hockney - he catches a glimpse of Maliha Jackson too and experiences the belly of a snake (a vehicle he finds "cosy" on the inside). Miller achieves authenticity through firstly experiencing Hockney’s art. I felt he had lived the artist’s progress then let it wash over and permeate his own. Approaching Hockney for the first time in his life, he didn’t "rip him off" as he jokes Hockney did to Walt Whitman in We 2 Boys Together Clinging: but he did take something. After the reading, I had to chase Kei up and ask what he meant by "ripping off"; perhaps I’d misheard him. He couldn’t remember how he had chose to express himself - it could’ve equally been "riffing off" he had meant. He didn’t seem to mind either way and I left with a satisifying image in my head: Kei Miller writing lyrics, Maliha Jackson singing in the street and David Hockney painting the scene somehow all "riffing off" one other, jamming. A passer-by stops and takes out an earphone.

Barnaby Callaby is in his final year of English Literature and Theatre Studies at Leeds University. He only feels 'employed' when writing and hopes to make sense of this metaphor upon graduation. You can follow his blog at www.thespareroom.blog.com and on Twitter he is @BarnabyCallaby

Find out more about the exhibition Hockney to Hogarth: A Rake’s Progress (until 3 February 2013) at Whitworth Art Gallery by clicking here.
Posted by MLF Blog at 3:13 PM