In the half a doughnut-shaped room at Waterstones in Deansgate, women seem to outnumber men almost two to one, confounding the stereotype of which gender likes superhero novels more. Then again, this could simply be down to the self-deprecating charm and humour of tonight's author, Samit Basu.  What costume would you have if you were a superhero, someone asks Samit. Well, taking into account my shape, he replies, possibly a trench coat?

The audience gets to choose the reading. Pakistani nuclear based or Bollywood scene? Bollywood won by a mile, though I was kind  of rooting for the Pakistani nuclear based. A pure Bollywood moment. The crowd parted like the red sea as Uzma sashayed out effortlessly portraying the Heroine Time-Slowing Effect, her hair unfurling, cascading, shining, a smile of pure delight spreading across her face as she saw Saheli goggling at her. Unmindful of the jaw-dropping, eye-popping, handbag-flopping effect she had on the crowd, Uzma raced across the Tarmac and swept Saheli up into an enthusiastic embrace. Several men leapt into spontaneous applause. Babies gurgled. Aunties wept joyously. As far as Mumbai was concerned, Uzma Abidi couldn't have made a better entrance. 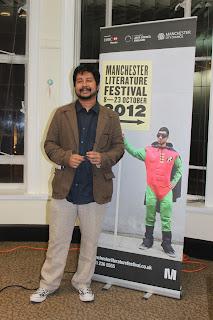 This is Samit Basu's fifth book and Manchester is the fifth city on his book tour of the UK. His previous book, Terror on the Titanic, was about the son of Mowgli trying to solve an interplanetary mystery on the Titanic before it sank. His latest book, Turbulence, is about a group of passengers who take a British Airways flight from London to Delhi and find they each have powers which reflect their innermost desires. A former pilot in the Indian air force finds he can fly, a woman who faced the responsibility of marriage and children too young finds she can replicate herself and have many lives. The scene above describes Uzma, who is off to India for work in Bollywood and her superpower is in effect that everyone suddenly loves her; she now possesses infinite charisma and charm, a key requirement for actresses. As Basu describes it, if you strip the American muscleman to bare essentials and transport this person to Mumbai and Delhi, this may be what you get.

What is it like being a writer in India?
Not fun... Actually I lie. Chaos and flux. It's all the new technologies, Ereaders etc, and English being so widely spoken in India. These are new frontiers, very different from India's centuries old literary culture.

In India, is the superhero genre popular and do you know why it is or isn't?
Samit said many good things here but he mentioned Captain India in passing. What you're hearing is the clanging of the bottom of my jaw as it drops Loony Tunes style onto the floor. I could go through a list of better superhero characters to strip and suit up as your own (sorry, Captain, you weren't bad in the Avengers movie), but Captain America? The mind boggles. I would also like to say that later the author did give me Wolverine-like claws, but I digress.

Favourite character?
The woman who could replicate herself. In effect she never has to make another choice again, from choosing flavours of ice cream to moving to another country and starting again. Samit's version is now busily buying many copies of his book.

On his recently edited trilogy:
Samit says he edited out 40,000 words. How do you know when you've edited too much, asks someone in the front row? When you're happy with what you have left, when it becomes too much work to change it and when other deadlines suddenly start looming, he replies.

One of the most interesting discussions was on the age-old superhero question of power and how ultimate power corrupts. What would you do if you had the power to change the world? Who would you become? This is not the theme of the book. It would seem Samit's version of superheroes realises India needs radical change rather than protection. Superheroes who don't decimate their foes? Well, some of that is included, he interjects.

Reina Yaidoo is a writer and  entrepreneur. She runs her company Yaidoo Ltd in Manchester.
Posted by MLF Blog at 2:14 PM