I went to the People's History Museum as part of the Manchester Literature Festival to see the novelist Alex Scarrow, who has written sci-fi stories for children called TimeRiders. Alex keeps the attending school children entertained and engaged, as he talks about how he used to be a guitarist, and about his travels to America and his first forays into the video gaming industry as a games designer. 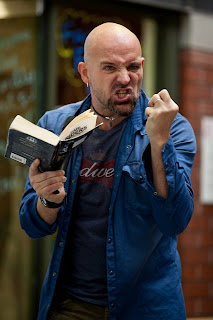 He doesn't patronise the children, staying honest and being open with his audience. Halfway through, he presents a trailer made for the TimeRiders series of books - it's not too dark for its target audience, yet there are comedic undertones to the trailer also. Still, it doesn't stop it being haunting and slightly eerie, which isn't a bad thing: children want to have a scary story - sometimes scares can inspire the imagination! After the trailer, Scarrow goes on to explain the fictional elements of his novels, comparing the change of timelines to the rebranding of ice cream. He also compares the altering of time in his stories to how general tastes in music, fashion and hairstyles change with the wind, bringing up his least favourite decades of the 1970s and 80s as an example!

When talking about his favourite music he brings up the band Nirvana, and when he asks for a hands-up of the audience who have never heard of Nirvana (I've never heard of them), half of the school children put their hands up and Mr Scarrow unleashes a loud, dramatic: "OH MY GOD, THAT'S CRAZY!!!" However, he forgives them for knowing who the Foo Fighters are (I listen to them also; my favourite song from them is Rope).

Alex Scarrow goes on to explain who the different characters are in his TimeRiders books, explaining the various storylines that occur in the series: Nazi-occupied New York City, for example. He then reads two chapters from one of the books, about how a mysterious man in charge of a "Time Agency" attempts to save an Irish boy from a sinking Titanic, by enticing the boy to take part in time travel. He says he is currently in the middle of writing his next story for TimeRiders, but says that his favourite book from the series thus far has been his first novel, as it was "a lot of fun to do, but somewhat nerve-racking too". He also reveals that throughout the series, the protagonists will start to grow up. 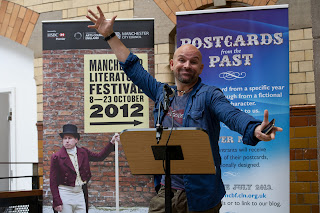 Towards the end of the afternoon, it is time for a questions and answers session, and everyone wants to know: what would he do if he could travel in time, what would he change and why? There is time left for three last questions, and a girl asks: "What inspired you to write about time travel?" Alex becomes a little quiet, then, tight-lipped, he begins to walk towards the podium then turns to face his young audience, saying firstly: "I'm probably going to confess something now to all of you and you'll probably hate me for my answer." He then gets up onto the podium and bellows out his answer to the audience: "I REALLY HATE DOCTOR WHO!!!"

He confesses that the reason he hates Doctor Who (presumably its current incarnation, starring Matt Smith) is that the sci-fi show, now fallen from grace, has become silly, stupid and daft and is no longer dark and gritty as it once was - no argument from me! Perhaps in many ways, Alex Scarrow's TimeRiders novels could be seen by his audience as the antidote to the dull, dismal and dreary Doctor Who with the equally dull, dismal and dreary Matt Smith. Scarrow explains that Doctor Who's past dark tones (prior to actor Smith/writer Steven Moffatt) were one of the initial inspirations for his own stories. Perhaps when Moffatt leaves Doctor Who, Mr Scarrow could lend his writing talents to the ailing sci-fi brand - just an idea to you, Mr Scarrow, if you’re reading this!


It all ends with a loud round of applause. Alex Scarrow was engaging, informative, very likeable and entertaining, and clearly he enjoys creating his stories of time travel - and the children, equally, enjoy reading them. All in all, a very nice, pleasant afternoon, enjoyed by everyone!

Throughout the Festival in 2012 we will be working with a group of young people to support them to become digital reporters, and to document a range of events from their perspective. As well as writing blogs and reviews, the young digital reporters will respond to our events using other methods such as photography, illustration and radio. We are really excited to see how our young reporters get on and hope that you will enjoy reading, listening to and watching their work.
Posted by MLF Blog at 2:37 PM