Words and photograph by Hayley Flynn. 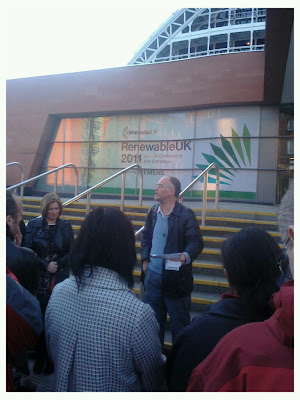 This evening's walking tour takes in three local pubs each with their own literary ties and has proven to be a big attraction for Manchester Literature Festival, with a group of around 60 people gathering at the entrance to the Midland Hotel. We’re certainly a thirsty bunch. The tour is split into two groups to make it a more personable experience and I set off with Ed Glinert's group in the direction of The Peveril Of The Peak. Stopping off every now and then, we remember the massacre at St Peter's Fields and how 80,000 people demonstrated for the right to vote. The Peterloo Massacre is covered in several books including The Manchester Man by Mrs GL Banks but most radically, perhaps, by Shelley's poem The Mask Of Anarchy. Shelley lays heavy blame with the Conservative party and talks of murder and fraud - as such the poem was considered too libellous for publication at the time. Comparing Eldon to fraud embodied, Shelley makes a rather beautiful reference to the cotton mills of Manchester in the following verse: "Next came Fraud, and he had on, / Like Eldon, an ermined gown; / His big tears, for he wept well, / Turned to mill-stones as they fell".

Taking in the Bridgewater Hall, a site which Booker Prize winner Howard Jacobson considers soulless, we approach the shimmering green delight that is the Peveril Of The Peak. Sitting like a little emerald island on Great Bridgewater Street, the pub is named after the Walter Scott novel and is also the name of the fastest stagecoach from Manchester to London. After we're all sated with beer and ready for the next venue, we stroll along the canal towpath learning as we walk about the political writer William Cobbett who carried the bones of Thomas Payne, a radical writer, with him when he visited Manchester. We stop off besides Manchester's longest running ballroom, The Ritz, and listen to the John Cooper Clarke poem Salomey Maloney: "I was walking down Oxford Road / Dressed in what they call the mode / I could hear them spinning all their smash hits / At the mecca of the modern dance, The Ritz".

By Bridgewater House, Ed recommends the best books that really make you understand Manchester through the ages, citing Love On The Dole by Walter Greenwood as an essential local read which sparks some discussions among the crowd about local authors. Weaving our way along the canal we reach our midway point, The Bank. Upstairs is the Portico Library and previous visitors and members have include Charles Dickens, Benjamin Disraeli, Thomas De Quincy, Elizabeth Gaskell and Val McDermid.

In the Evening Standard, 1936, George Orwell wrote an article describing the perfect pub. The pub should be free of music or any extraneous activities, he called this pub The Moon Under Water and it's this pub that the Wetherspoon chain is based upon. But we bypass Wetherspoons in favour of some local character and end our tour taking in the grand John Rylands library, home of the oldest piece of the New Testament, and have our final drink at the Sir Ralph Abercromby. This is the only building in the area to have survived the Peterloo Massacre and so nicely wraps up the tour back where we started.

Hayley Flynn won Best City And Neighbourhood Blog in the Manchester Blog Awards 2011 for her site, which features the regular Skyliner series, which looks at "the secrets above your eyeline".
Posted by MLF Blog at 12:05 PM