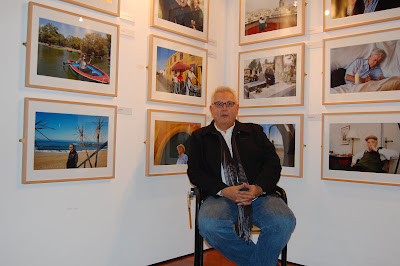 I came to the event having never read a word of Cuban poet Víctor Rodríguez Nuñez’s work and left determined to change that. His poems were compelling, deceptively simple, powerful and occasionally dreamlike. He generously read one of the poems of his host, UK poet Grevel Lindop, translated into Spanish, which I also enjoyed very much. I don’t understand Spanish so it was a little strange to hear the poet read his work followed by Lindop reading the translation. Translating poetry, a medium that turns so much upon exact word choices and precision of both meter and meaning, must be devilishly hard.

Questions from the audience provided some interesting revelations from the poet on this theme, most surprisingly we learned that he doesn’t write a line in Spanish if he doesn’t think it would read well in English. Such a revelation would make native tongue purists throw up their hands in shock, but coming from a poet who has lived in America for a number of years, and is married to his translator, it is perhaps not as surprising. His reflections on varying shades of meaning and expression in different languages were compelling, especially a moving anecdote in which his young son, who had until then spoken Spanish with his father, asked to speak to him in English because part of his soul was in the language. If I have any regrets about the evening, it is that there was not more time for such discussion with the audience.

The second part of the evening was the launch of Of Ink And Light, an exhibition of the powerful portrait photographs of Daniel Mordzinski, who has spent his professional life photographing the great voices of Spanish language literature. Standouts for me were his photographs of Jorge Luis Borges and Gabriel Garcia Márquez. The exhibition runs until December 14, and is well worth a trip to Instituto Cervantes.

Kate Feld is a writer and organiser of the Manchester Blog Awards and Real Story project, which has just gone live following the announcement of the winners at the Blog Awards on Wednesday 19th October.
Posted by MLF Blog at 12:03 PM