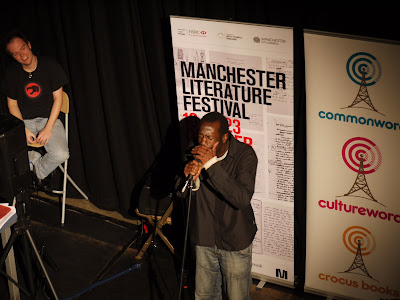 Bouncing onto the stage is the excitingly spontaneous Dominic Berry, writer/poetic performance artist and winner of the previous Slam Final. Appearing to never suffer from a pout or frown, Dominic introduces us to the judges of this stirring competition: Baba Israel, Artistic Director at Contact Theatre, writer/poet and Commonword’s very own Yvonne McCalla, and one of Arts Council England’s Alison Boyle. In addition to these "celebrity" judges, two members of the audience are chosen to award points for the public. Points are awarded for both performance and content. Poets have three minutes to Slam! their poems before they are interrupted by a gruelling noise made by Segun Lee-French. A founding member of Manchester’s Speakeasy People poetry and music collective, Mr Lee-French tests the judges with a theatrical performance of one of his own works which describes a typical Mancunian Friday night down Deansgate.

The first round is astounding. If I had known I would be in the vicinity of such talent I may have brought an autograph book. There is a huge variety of material; accidental muses, cigarette nubs, slavery, wars, modern love, pigeon-loving smack heads. I felt like I had boarded the Pepsi Max of poetry. Aidan throws us a quickie on young lovers before he begins his competing poem: "Oh how romantic / now they’re alone / she’s checking Facebook / he’s on his phone".

Despite each contestant’s pieces being worthy of the rapturous applause received, there are three which I should mention; Emma Purshouse’s poem on cigarette nubs, Zodwa Nyoni’s intense piece on global wars (first whopping 10 for content) and Rael James’ skill with rhyme and meter - together with his expressive words, this gets him awarded the second sparkling 10 for content.

Welcoming back the increased gathering, Dominic covers us with one of his own poems called Time Travels, recently written and with an admirable annunciation to Manchester Literature Festival 2011 (hooray!). While the poets reel off their craftworks in the second round, the air feels somewhat tenser. Legs twitch, contenders rub their hands as they look on at their opponents. Even I can feel my heartbeat picking up its pace. Themes seem to have subdued in this heat; lost love, riots, a passionate voice about passionate voices, yet up we go again with Emma's entertaining Mexican fruit machine song. Mark takes control of the stage with a heartfelt performance and Rael stitches my memory with the words "I want to do cartwheels to show you how my heart feels". What a rolling sea of verbal waves. In accordance with Dominic, I have to say Rael really is a Ninja of rhythm and rhyme.

The air is heavier than ever. We crane our necks to see how far the judges are with their tallying to reveal the final two who will go head-to-head in the ultimate word-off. It's Rael James and Mark Mace Smith.

So Low, So High is Mark’s final poem of the competition. And what a poem. Not only does it possess beautiful imagery of nature in conjunction with oneself, he provides it with incredible delivery, both vocal and physical, captivating the audience with a blending assonance and onomatopoeia. His final syllable collides with the sudden "out of time" noise. Phew.

Up next is Rael "Ninja" James. We sit and we listen to Rael’s meaningful words of a growing relationship, one that blossomed and grew, drawing tears, attracting envy. Everyone is paying attention to these sincere words uttered in his usual melodic, urban tone. He tells us he wants to share the object of his poem and so we sit, transfixed, waiting for him to produce… a pair of bloomin' trainers! This guy knows his art like a painter knows his paints.

Although very tight between the two finalists, Mark Mace Smith is declared winner of this year’s Superheroes Of Slam Final. In his modest demeanour he finishes his final performance with a homemade turntable-scratching political, satirical verse.

I speak to Mark briefly after his win. He explains he first began writing poetry to woo a girl in his teens. He sent her letters and poetry until he finally won her over. Seeing he had a gift, or something that would help him win further females, he became further inspired by some of the greatest lyrics surrounding him at the time. He loves to perform and after tonight we can see why.

Congratulations to Mark Mace Smith, Rael James and the other six grand finalists.

Kevin Danson is an English Literature student at MMU. Read his blog Pebbleddash and follow him on Twitter @pebbleddash.
Posted by MLF Blog at 3:10 PM