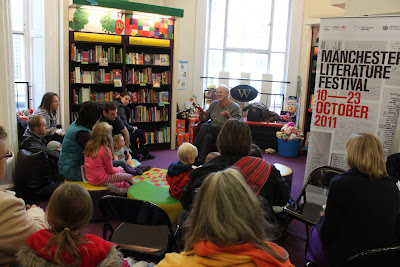 Toon Tellegen is a Dutch writer who has created a beautiful world populated by anthropomorphised animals that also deals with aspects of philosophy. He started his reading by briefly explaining how he follows a rather strict set of rules for his world. Firstly, all of his animals are the same size, which is important to understand when elephants are asking squirrels to dance. Secondly, in this world there is no hierarchy. Thirdly, there is only one of each thing to avoid confusion. The animals all like each other and want to share and there are no wars.

The children and adults sat around him in a sunlit corner of the children’s department as he began to tell his tales. At first some of the children were rather busy playing with other books, but as each story went on they became more and more involved. Almost as involved as the parents!

He was reading from his recently translated work The Squirrel’s Birthday And Other Parties and started with a story about a snail who built an extension onto his home, so that he could have a party. This was certainly an odd one, but definitely an endearing tale. He also read A Speck Of Dust, The Rhinoceros, Wish List and The Whale And The Seagull, but my personal favourite was A Cake For Someone Who Doesn’t Fancy Cake, because – just like the Squirrel and the Ant in the tale – I always fancy cake.

Although the event started with only a handful of people, it quickly filled up when people had managed to get past the press and crowds in St Ann’s Square, where Betty Driver’s funeral was being held.

The time passed ridiculously quickly and Toon then honoured me with a chat. I asked him very little, as he was a wonderfully warm and chatty man who was willing to offer lots of information. He told me that this was only his second reading in the UK, the first one being a year ago in the small village of Briar Marston, a place where he spent a summer as a 14 year old and to which he returned and read to their primary school.

We also discussed how sometimes clever words created in our own language create an impossible situation for the poor translators, who have to try and find an alternative for an animal which is part beetle, ant and mole (molkevmier? Sorry If I have messed this one up, Toon!). I also exposed my true heart and told him that I too have written a children’s book, but that I – like him – also write for adults. I enquired whether such behaviour was more acceptable in the Netherlands as I understand that it is certainly less accepted here, and apparently it is equally misunderstood.

I finished by asking him for his thoughts on that now rather infamous Martin Amis quote regarding the circumstances under which he would write a children’s book. Toon was, as I expected he would be, wonderfully gracious about this statement, saying that although many in his circle back in the Netherlands were up in arms about it, that it really was a statement made to create controversy rather than reflect an understanding of the processes of writing for children.

Toon was a pleasure to meet and you should all go out and buy his wonderful books, even if you don’t have children.

Lisa Hart-Collins is a writer, traveller, teacher and artist. Not always in that order. Born in Manchester, her love/hate relationship with the city tends to send her running from and returning to it at irregular intervals. She is presently taking a sabbatical to attempt to get her children’s book published.
Posted by MLF Blog at 11:42 AM