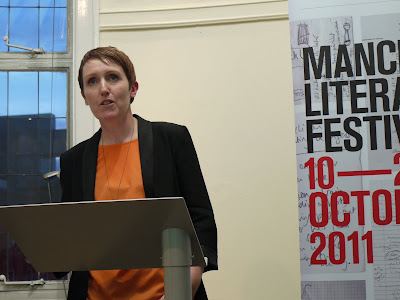 Catherine O’Flynn’s debut novel, What Was Lost, was critically acclaimed and won the prestigious First Novel prize at the Costa Book Awards in 2008. What a pity for the 20 agents and publishers who rejected it before it was printed by Tindal Street Press, a small Birmingham publisher. It was on my final year reading list at university and its natural prose, humour and engrossing mystery plot led me to pick it for an essay subject. After spending significant time scribbling my rambling thoughts and question marks on the pages of her first novel I am glad to be in the intimate Waterstone’s event room this Saturday evening, to hear her chat about her second novel, The News Where You Are.

It is evident by the sitcoms that grace our television screens regularly, the American sense of humour often differs to the British. Flynn mentions that in America her novels are placed in the mystery category, but in comedy in England. She prefers to think of her work as the latter and says that anyone expecting an intricate and gripping mystery plot would be disappointed.

Writing has come very naturally to her. When asked about how she developed her unique style she struggles to answer, seemingly embarrassed by the application of her real voice. It is a similar style to her emails and letters, she says. How easy she makes this writing malarkey sound. But, could a voice be taught and nurtured? Or does it simply exist or not, and that is that? She couldn’t say, except that she finds the notion of "finding" a voice an "over-mystification". She uses her natural voice, but other writers create a more heightened prose, and that works for them.

Her second novel is about Frank, a local news reporter with a superficial "corny" persona who becomes greatly affected by the tragic stories he uncovers. She is interested in exploring the person behind the image. Local news reporters are often sneered at and viewed as ridiculous, she says. Her life experiences and interests influence her fiction. She recounts when she worked at HMV and a local reporter, who was often viewed as a bit of a joke, approached the counter with surprisingly acceptable choices to her critical musical ear. His politeness and charm seemed incongruous to his screen character and made her admire the largeness of personality required to be indifferent to the constant sniggers. Growing up, she watched a lot of local news, stories that were both funny and sad, a “strange cocktail of the surreal and the depressing”. She says that her books are basically the literary equivalent of the tragic-comic local news programmes.

The characters in her novels suffer from lost or misled ambition. I ask about her attitudes to ambition and she responds that, in a sense, she is "ambitionless". She never expected to be an author. She had many jobs before this, including a post woman and in the box office of a local arts centre. She will stop when it feels natural, she does not want to be trapped in the label of being a "writer" and churn out novels for the sake of keeping the role. Her ambitions lay in the smaller finer things, the ability to read what she liked and such. I say to her this instils an optimistic thought that, sometimes, good things can unexpectedly happen. She replies that so called "grand" ambitions are not always needed to achieve.

Catherine O’Flynn has kept her self-called ramblings succinct; she has been easy on the ear and incredibly humble when it comes to her work. I approach her with my copy of What Was Lost, and she writes in it ever so graciously, "I am sure your essay is better than the book". Oh, if only.

Sarah Holland recently graduated in English Literature from Sheffield University and now lives in Manchester. She writes about the arts and has a screen blog, Girl On Film.
Posted by MLF Blog at 1:29 PM