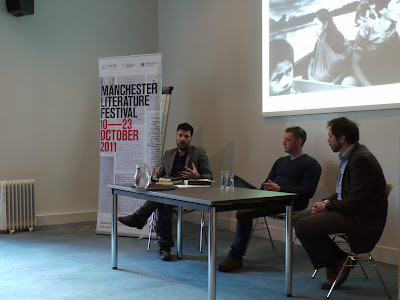 In a quiet room on the topmost floor of the Manchester Museum, Johan Oldekop, a biologist, begins a discussion of his research in the Amazon. He stands in front of about 30 people, and illuminates the complexities of environmentalism and conservation when placed against indigenous peoples' concerns. “The environment,” he says, “is like a plastic cup. You can squeeze a plastic cup, and it will change its shape, but it can re-form and it will still hold water. But if you squeeze it too hard, it’ll break, and it won’t be able to hold water any more, and importantly, it won’t be a cup.” Why squeeze the cup? Development.

He put it most starkly by telling us about how one village is currently six hours away from the nearest hospital by boat... but if those villagers had a road, they would only be one hour away. They want a road, but conservationists want to maintain the rainforest, and in the heart of the Amazon, Oldekop argues, is where issues of science, progress, humanity and the environment come together. Where do human rights, such as access to medical care, trump environmental concerns, and who should be the beneficiaries?

Oldekop's research focused on the role of rural communities in conservation initiatives and environmental impacts, so his work fits neatly in with today's other speaker, Edward Docx.

The Devil's Garden, by Docx, is about a scientist named Dr Forle, who is based on a river station deep in the South American jungle. Docx begins by telling us that he’s happy to be in Manchester promoting his new novel, because Manchester is his home town.

First, Docx discusses his inspirations that led him to write this book, including Coetzee and Conrad. He describes casting his characters in such a way to maintain conflict. “Conflict is drama,” he says. For example, if there’s a scientist, then there should be a religious person to conflict with the scientist. He tries to imagine his characters as a whole cast, in the round, so that there’s always drama. In The Devil’s Garden, he says, there’s drama because it’s about the conflict between corporations, environmentalists, scientists, missionaries and indigenous people.

But the real issue that his novel is about (and, he says, that every novel is really about) is how we should try to live.

Edward Docx then reads out some short sections of his novel before the floor is opened to the audience for a Q&A. The discussion ranges from eco-tourism to ethics, but most interestingly, one audience member challenges both Oldekop and Docx’s work. By explaining how all the complications and complexity of decisions around environmentalism are so interrelated, they’re essentially saying there’s nothing we can do that would be both fair to everyone and still save the earth. It’s despairing, and shouldn’t we just stop even trying to save this planet? Shouldn’t we just work on finding a new one to colonise, if this is all so complicated that, in the end, we simply can’t figure out what the best route might be?

In response, Oldekop and Docx both recognise the despair in their works, but Docx tempers this sentiment by saying that humans have always been inventive and creative. Art, he thinks, is humanity’s redemption. While his book is dark, he feels it is full of light. If people will re-read the book (which, he says, “is the only way of really reading”!), he thinks they’ll find it suggests there is a future.

And Oldekop agrees, saying that nihilism is dangerous, because if we really begin to believe there’s nothing we can do, then it will stop us doing anything to protect our planet or take care of people.

Nija Dalal is a writer, radio producer, and a second-generation Indian-American. She's radio obsessive, cooks and crafts and sews, and keeps a blog about it when she remembers. Currently in Manchester, she's lived in Sydney and Atlanta, and she's looking for a job in radio.
Posted by MLF Blog at 4:55 PM