The bees have it 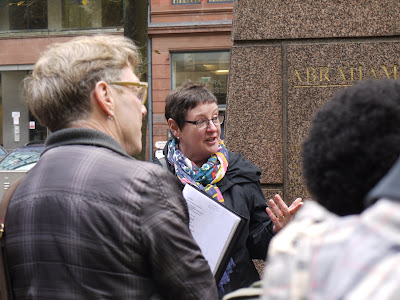 I have a confession: I don't like poetry or walking. Both of these things are a continual disappointment to me, I blame my fondness for heels and impatience at flowery verse. In an effort at self-improvement, I volunteered to review Anne Beswick's Poems Of The City tour. This is not as mad as it seems, as I have a weakness for history and am unashamedly in love with my adopted city of Manchester (not easy to admit when you come from Yorkshire).

So there we stand, at that most Manchester of meeting points (the Town Hall clock) on a typically drizzly day. While I worry about the frizz of my hair and the stupid height of my heels, we wait for Anne, our Green Badge tour guide for the afternoon. Anne promises to open up the secrets of the city through history and poetry. She delivers in spades.

Anne takes us on a journey of Manchester’s architectural might (the Town Hall, the Free Trade Hall, the Midland Hotel, the Cathedral and the John Rylands Library) and hidden historical landmarks (the Wood Street Mission, the Shambles, the Lincoln Memorial and The Knock Shrine Shop). She shows us things that I scuttle past - head bent in commuting concentration - on a daily basis.

With good humour she stands in the chill air reading softly, with a delicious Manc twang, as the city flurries around her. We’re entranced. Anne’s poems perfectly evoke the scenes she is setting. Using the souring language (with not a flower in sight) of Allan Ahlberg, John Cooper Clarke, Carol Ann Duffy, Mike Harding, Rudyard Kipling and William Cooper, Anne brings to life the evolution of a city built on industry, reform and emancipation. From the horrors of the Peterloo Massacre, when ordinary men, women and children of Manchester were killed by dragoons as they protested for the vote, using Shelley’s Mask Of Anarchy. To the bees on the city’s crest and street furniture to represent Manchester as a hive of industry, using Kipling’s The Bee Boys.

And as if the poetry of others is not quite enough, Anne uses her own glorious verse of historical facts to weave together a picture of times past. Take the Abraham Lincoln Memorial, which makes sense when set against the backdrop of the American Civil War's stranglehold on the cotton trade. Lincoln’s blockading of all southern state trade to force them to relent on slavery led to the Lancashire Cotton Famine. After a meeting at the Free Trade Hall, the people with the power wrote to Lincoln to complain that his blockade was causing poverty, but that despite this they would back his endeavour to eradicate slavery as all men should be free.

Then there’s the Midland Hotel, owned by the Midland Railway Company who opened the first passenger rail station in the world in Manchester. They ignored the nay-sayers who said passenger travel would never catch on and that the 30mph speeds would cause your internal organs to get muddled. That’s Manchester for you: always at the forefront of fairness and progress.

I learned more about Manchester in an hour and a half with Anne, than I have in the 12 years that I have lived here. And I liked what I heard. I am enchanted by this city that put freedom above wealth and is firmly built on revolutionary foundations. I am proud to be a worker in this city of bees.

I bet you didn’t know that there’s a church crypt under the cenotaph on St Peter’s Square or that the British vegetarian movement was started in Manchester by Reverend Cowherd, did you? This stuff matters. Stop looking at the floor; book a tour.

Elsie Anderton is a gin-nurtered time waster, chickenwidow and author of the almost award-winning blog, The Babylon Lane Tales.
Posted by MLF Blog at 5:40 PM