Words and photograph by Jennie Shorley. 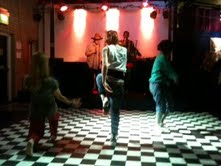 Broken Rose Performing Arts Company and the Contact theatre come together for this revolutionary open stage event, which sees dancers in close conversation with poets.

So the programme says. I don’t completely understand what this means, so have no idea what to expect from this Friday evening in the Contact theatre.

My friend has never been to Contact before, and proclaims, as I first felt, that it looks like a castle from the outside, its soaring turrets at odds with the 70s façade of The University Of Manchester. And as we enter, the space designated for tonight’s performance has a magical, Alice In Wonderland air with a chequerboard floor, and is jammed in between the bar and the audience from the big show tonight. There is no boundary between the audience and stage, except for the edge of this performance space. It is all quite exciting.

Broken Rose’s Artistic Director, Gemma Connell, introduces the evening as “a total experiment” in improvised dance and slam poetry. The Contact theatre itself is a performer, with the dancers “using it as their music”. There will be three sections, 1 – a random pairing of a poet and dancer, 2 – a group session of the same, and 3 – a terror-striking-into-heart audience participation section.

I feel almost as nervous as the first poet, Dominic, looks, as his name is pulled out of the hat (no hat available, boot instead), and he takes to the stage, accompanied by Sarah; his dance-by-chance partner. As the audience hubbub dies down, he commences with emphatic shouts of “this is terrifying!” and I’m sure that we are all rooting for him.

And so he starts. I can’t distinguish between slam poetry and MC-ing, but that really doesn’t seem to matter. As Sarah confidently begins spiralling and twisting to the music from the DJ in the corner, Dominic concentrates on her, and they draw confidence from each other. Rushed words slow into a beating, melodic rap, as Sarah spins, whirls and challenges him. Suddenly I get it. The magic that comes from knowing that this will not happen again, that this experiment is for the here and now, and only for us. And I feel utter admiration for these two brave people, who love doing this so much that they will stand up, a short distance from the audience, stage, costume, script and lights stripped away, and just speak and move as if their lives depend on it.

The DJ’s ambient music is an unspoken partner in this experiment – if anything, it directs both dancer's and poet’s movements, volumes and beats. It is almost as if they hold on to the sound, because that is the one thing that is not down to them right now. I love it.

Two more of the same pairings follow, Jamal and Gemma, Indigo and Katie, with equally surprising and exciting results. With all three, the music is a leader for dancer and poet, the lines between the latter even blurred as the poet leans an exploratory arm out into the dancefloor. There are no rules here.

The group round, to me - although the performers work together well - isn’t quite as beautiful. The security of numbers means that the performers somewhat lean on each other for support, which, although especially the poetry, certainly works in terms of flow, doesn’t paint quite as stark a picture.

The group dance gives way to audience participation, after the usual sickening several seconds of complete silence when a teacher asks a question, the youngest audience member, seven-ish Nyah, is volunteered up to dance by his mum. After more silence, Roxanne, clutching her iPhone, uncertainly walks up from the crowd, and is cheered on by the audience, applauding in the knowledge that she is braver than all of us.

Of course, this section is even more of an experiment, and completely unscripted; these performers are not even on the bill. But they’re great. As with the other poets, it takes a short while for Roxanne to find her flow, and Nyah is brilliant, it's not just body-popping spectacular stuff, but he too is really feeling what’s going on and responding to her. This is the ultimate blurring between audience member and performer.

I leave feeling elated, full of admiration for these brave people, and impressed with their skill. The next event could have a freestyling musician for true randomness, but for me, Flow! really, well, flowed!

Jennie Shorley graduated with a Masters in Ancient World Studies from The University Of Manchester, and is currently in the research training year of a PhD. She lives in the Northern Quarter and likes writing words and making things.
Posted by MLF Blog at 11:36 AM