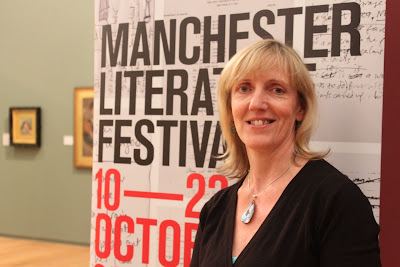 Image To Word is one of the most intriguing events of Manchester Literature Festival, giving attendees the chance to hear original poetry in an unusual setting, with the added benefit of having a near-private viewing of the excellent collections of the Manchester Art Gallery. This year’s event ties in with the Ford Madox Brown retrospective, an appropriate choice given Madox Brown’s own literary connections.

Remembered as an inspiration for the Pre-Raphaelite Brotherhood, Ford Madox Brown took much of his own inspiration from literature, especially the works of Shakespeare and Byron, and created paintings weaving writers such as Chaucer into the fabric of English history. One of his descendants went on to make his own impact in the field of Modernist literature, under the name Ford Madox Ford.

After having the opportunity to take in the exhibition, we are greeted by the curator, who explains the purpose of the event – by inviting a poet, Jean Sprackland, to respond to the paintings, the organisers hope to inspire a new interpretation of historic works. Jean herself admits to being "not at all an expert" on Madox Brown; she is looking to create a "parallel experience", using a variety of styles and forms, as the painter did over the course of his career. Sprackland avoids using Madox Brown’s more literary paintings for her inspiration, in favour of creating her own narrative from his portraits and depictions of modern life.

Sprackland has selected six paintings to respond to, and delivers each poem in front of the relevant piece; turning the event into a promenade, the poet becomes a tour guide, helping to open our eyes to hidden meanings within the paintings, using her words to give us a new interpretation beyond what may be found in the guidebooks. The frequent moves create a communal atmosphere, and encourage conversations between audience members, while the opportunity to get up close to the pieces on display is a rare treat.

The first painting Sprackland chooses is The English Boy, a portrait of Madox Brown’s young son. The painting is a pastiche of royal portraits, showing a boy of seven brandishing toys as though they were an orb and sceptre. Sprackland’s response effectively captures the independence and self-possession of the child, and a strong identification with nature, all qualities shared by the iconoclastic Pre-Raphaelites. We move on to Take Your Son, Sir, a painting Madox Brown never finished. The painting itself is open to multiple interpretations; a smile on the mother’s face could also be a grimace, the baby, a symbol of new life, appears sickly. The unfinished and undecided nature of the piece is reflected in Sprackland’s dream narrative, which takes a dark view of the source material, imagining the painter with a sense of lurking regret.

Not all of the audience are familiar with Madox Brown’s work, but as we move from piece to piece, you can overhear whispers of awed admiration at the painter’s technique and vision. The third piece, The Last Of England, is one of Madox Brown’s best-known works. The painting depicts a couple emigrating from England, with Maddox Brown himself as the male partner. Behind the central figures, rowdy characters crowd into a constrained space, and the overbearing tone is one of discomfort, and failure. Sprackland, however, sees redemption in the hand of an infant poking from beneath the woman’s shawl. She captures the clamour of the piece with evocative use of metaphor, describing the jitters of the boat and the muscle of the sea.

From here, we move onto Madox Brown’s other signature piece, Work. This painting is full and rich, bursting with noise and colour. We see the contrast of wealth and poverty, mental and physical labour, compressed by an urban environment and the confusion of the industrial city. Sprackland compares the broken-up road in the centre of the painting to the breakdown of the pre-industrial social order. This theme is continued in the fifth poem, inspired by The Hayfield, where Sprackland imagines the aftermath of rural work, comparing farmhands to the navvies of Work: "We worked that field like a factory floor… carried the weight of August on our backs."

Finally, Sprackland leads us to a portrait of the Bromley family. Here, the poet attempts to disrupt the traditions of the family portrait through surreal language: "sat under a blue-enough tree… you could practically smell the brothers". This mirrors the way in which Madox Brown’s lively, informal painting subverted the stiffness of Victorian photograph portraits.

Words To Image was a fascinating opportunity to gain a new insight into the works of a magnificent painter, and enjoy poetry in a unique environment. These events should become a regular fixture at the Manchester Literature Festival.

Thom Cuell writes about books, art and theatre at the Workshy Fop blog.
Posted by MLF Blog at 5:07 PM

Our rolled canvas prints option is perfect so you can have the highest quality of canvas prints easily delivered to you. Art Movements

Very often foreign students studying in the UK do a part time job and thus, fall short of time to finish assignments and look for Research Assignments Help in UK. There are a number of instructional writing companies in UK,but provides the highest quality assignment aid.

You can adjust your timings, days, and online tutor according to your necessities and start learning the Islamic Teacher without worrying your work, job routine, and other pledges.