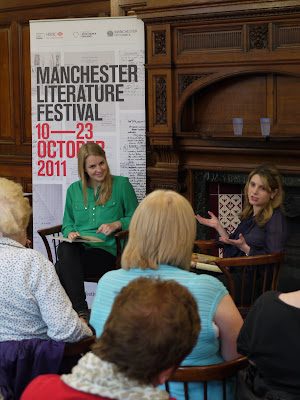 Arriving at the rather grand Becker Room in the City Library, I watch as the room fills with people (mainly women) to hear historian and broadcaster Hallie Rubenhold discuss her debut novel, Mistress Of My Fate, as part of Manchester Literature Festival. The novel is the first in a series, The Confessions Of Henrietta Lightfoot, though Rubenhold has previously written studies of Georgian low-life, The Covent Garden Ladies and Lady Worsley’s Whim.

Rubenhold’s interest in history comes in part from her British father and regular visits to these shores, discovering rich culture and history. As she points out, even the Becker Room will have seen some interesting sights over the years. Growing up in LA, she was acutely aware of a lack of history in her early life, before her postgraduate career brought her an MA and then a PhD from the University of Leeds. She welcomes the transition from non-fiction to fiction as “very liberating”, embracing the freedom to create and speculate – within the parameters of the time period.

Growing up familiar with the history of the American War of Independence, Rubenhold describes that period of turmoil as “an adolescence for the Western world”, with a youthful energy and a fight against the established order of things; but coming out of the period in a more stable way.

Setting the scene for the novel, Rubenhold reads an excerpt hinting at a questionable past and an uncertain future - the dark edge between the London underworld and country house glamour is an important theme in the novel. In fact, in the interests of learning something new every day, I can now confirm that I feel fully appraised of the system of rankings within prostitution, from mistresses to park walkers and street walkers to disease-ridden "bunters" – with others in between.

The conversation refers often to Rubenhold’s academic life and how much it influences her other work. In fact, asking Rubenhold her thoughts on historical inaccuracies clearly hits on a pet hate as she replies, “It irks me!”, and tells us that – in her own experience - television commissioners don’t always have respect for history, some screenwriters have no historical experience and, worst of all, some programme-makers assume that the audience is too stupid to realise (she means you, 1917-set Downton Abbey, with your electric curling tongs...).

An audience question about the popularity of historical fiction sees Rubenhold’s academic passion rear its head straightaway as she condemns the lack of variety in most historic fiction: “It’s all kings, mistresses and wars – there’s very little variety. The most groundbreaking work in the field of history is totally different to what’s on the shelves in supermarkets. Worse, there seems to be a worrying trend of learning and entertainment being deemed entirely incompatible.”

When talk turns to her reading habits when younger, it doesn’t come as a huge surprise - given her chosen specialism - to learn that Rubenhold has high regard for Wuthering Heights, Les Misérables and Gone With The Wind. With Henrietta Lightfoot, she hopes to emulate the grand panorama – blending the personal, social and political contexts - albeit over the course of more than one novel.

Before we reluctantly return to the 21st century, Rubenhold gives us a sneak preview of Henrietta’s adventures. In The French Lesson (publication in 2013), Henrietta is living in Paris (during the Terror) and the third novel sees her in Italy, just before it falls to Napoleon.

Although transport delays mean a late start to this fun and engaging session, Rubenhold’s passion for history and literature is clear. A lively discussion about the potential pitfalls of combining and adapting the two lead to a lively lunchtime and eager anticipation of Henrietta Lightfoot’s further gallivanting.

Laura Maley lives and works in Manchester and blogs about arts and culture at Cultural Shenanigans. You can follow her on Twitter @elle_c_emm
Posted by MLF Blog at 12:44 PM