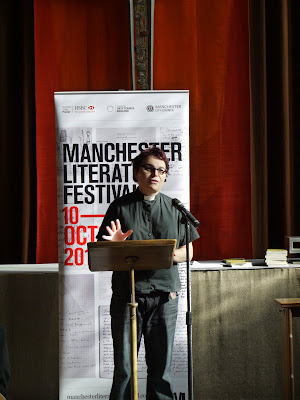 It’s probably a bit odd for an atheist to select this particular event to review, especially two years in a row. Arriving at the Cathedral on a windy, rainy Manchester lunchtime, I can’t help but feel like the outsider, the ticking bomb; the terrorist in the midst of the audience when I come to events with a religious bent, like Al Pacino stepping into the cathedral in Devil’s Advocate and touching his finger to the holy water in the font.

Yet, since the Cathedral Poetry Competition began holding its prize-giving as a formal event within the Literature Festival last year, I’ve chosen to review it. Last year because nobody else had selected it, and this year, I chose to do it again almost as an act of ownership. I could remember sitting in the Jesus Chapel and listening to the poets read their work, the thrill at the prize-giving, and wondered that people could miss out on this treasure of the festival.

As Rachel Mann, the poet in residence at the Cathedral, tells me, poetry can express something of our lives that nothing else can. The poets submitting their work come from all walks of life, have all manner of experiences to share, and relate in their words the great variety of human experience. They give words to the inexpressible, find the mysterious, the surprising, and the funny in every little nook of life.

We begin, as ever, with a few words and poems from the judge. This year, Jeffrey Wainwright reads from his forthcoming book, The Reasoner. His work for this collection gives me the impression of a man looking upward, regarding the heavens and wondering. It evokes the true spirit of the prize, which is not about the religious in the dogmatic sense, but the religious that is about a sense of wonder at the world and everything in it. Rather like poetry, in fact.

Many of the chosen poems reflect the confusion of emotions that follow death, from the struggle to live with the hole left in our lives by the loss of a loved one to the bizarre little behaviours of the grief-stricken, when meaning is turned on its head and the insignificant becomes most powerful. Of the commended poems, Marguerite Wood, Gillie Robie, Ruth Hobson and Susan Bedford read their selected work. Each one is a window on a life, a single moment, from Wood’s memories stealing back into her life to the buried spider of Robie’s Transmigration.

Wainwright’s introduction explains that he chose poems that, no matter how many times he read them, kept their air of mystery and surprise. Satyadaka’s The Man Who Gave You That Old Map, which took third prize, put me in mind of the wedding guest who, after meeting the ancient mariner, is left completely changed by the experience of hearing such a story. It relates the struggle to understand the inexplicable related in such perfectly prosaic language - the almost throwaway line “you keep on with it anyway” coming with a shrug of the shoulders that some things are always going to present mountains to climb in understanding.

Joel’s Ward, the second prize poem by Martin Eggleton, came from personal experience of his struggle with cancer treatment. The vital, visceral quality of hospital life, every man on the ward communicating with his own personal god in the midst of suffering, mingles with the lucid, transcendent moment of delirium seamlessly. Finally, the winner James Harpur is an established Irish poet whose Finbarr And The Serpent Of Gougaine Barra is a tight reckoning of the faith for the saint, a dark and fantastical exploration of human struggle, whether with the natural world or the spiritual.

After the event, the poets and audience mingle in the visitors centre with an excellent spread put on by the cafe below. Speaking with the poets, it is clear that they use this medium as a means to explore the reality of their lived experience, especially as it touches those great areas that remain mysterious, or shrouded with emotional and psychological uncertainty. Regardless of faith, or lack thereof, some things in life elicit such emotion and the need to express it, to bear witness to it, and this is what the contributors to the Poetry Prize do so well.

Joely Black is an author and writer living in Manchester. She writes for various online and offline magazines and has completed a series of fantasy novels under the title Amnar. She runs a local book club as part of the wider Greater Manchester Skeptics Society and has given talks there and elsewhere on various subjects.
Posted by MLF Blog at 4:55 PM