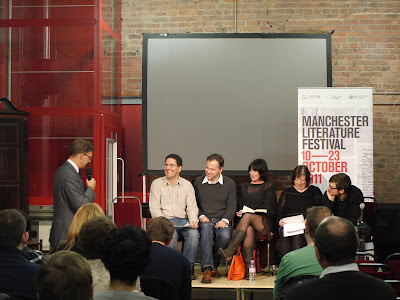 A couple of hours before this year’s Booker Prize winner is to be announced, The University Of Manchester’s own cabal of bookish experts turns out at the International Anthony Burgess Foundation to thrash out the advantages, complications and intricacies of literary prize culture. The debate is all the more timely in that this year’s Booker competition has been dogged by more than the usual speculation, with Dame Stella Rimington, head of the judging panel, announcing that she wanted "readability" (see link), and Jeanette Winterson, responding in the Guardian, saying that, in contrast, great literature ought to demand "time and effort" (see link). What’s happening? cry the commentators. What’s the remit of literary prizes? Have they replaced critics as the arbiters of public taste? Have the publishers’ publicity machines obliterated the rewarding of quality? Do we really need the Booker? Never fear, dear reader – our panel has stepped boldly into the breach to figure it all out.

The event’s facilitated by journalist Michael Taylor, and joining him are most of the staff of the University’s Centre For New Writing – Vona Groarke, MJ Hyland, Ian McGuire and John McAuliffe – as well as Jerome de Groot, Senior Lecturer in the English Department; between them, we’ve got poets and novelists, academics, literary prize judges and prize-winners – including, in Hyland, a former Booker shortlistee. Jerome de Groot is first to the microphone: he starts out by saying that the Booker Prize has, in the UK, created a market for books that wouldn’t otherwise have gained any traction; that it has contributed to the development of "serious literary fiction" as a genre; that it has educated and enfranchised the reading public. It also, he says, gives us an insight into publishing as an industry – here, the Booker and its associated yearly media furore reveal the marketing, the commercialisation and the cultural capital that fire that industry. But, he reminds us, we ought to recognise that this is what we’ve allowed publishing to become; the Booker isn’t the engine that’s warped an otherwise "pure" literary entity.

Next up is Vona Groarke, who’s determined to educate us on the judging process itself. Want to win a poetry prize? Vona’s recommendations include: suffer a convenient bereavement and write a whole book about it; be as young and attractive as possible; be socially aware, but not – horror! – politically definitive; be cynical, but not too cynical – you’ve got to seem heartfelt, after all. And the judging panel itself? Watch out for hung juries, nepotism, king-makers and the ill-informed. She’s not all doom and witticisms, of course – she points out this year’s Nobel Winner (Tomas Transtromer) as an example of a deserved win – but she also says that there are problems inherent in panel-judging procedures, like the Booker’s; while outstandingly excellent texts can win, it’s the outstandingly unobjectionable that tend to survive the group-judging gauntlet. MJ Hyland (shortlisted in 2006 for Carry Me Down) agrees with this; the book that the prize committee objects to least is the one that tends to win, she says, before reading an excerpt from a John McGahern essay that backs this up. Later, she adds that, despite this, we need more prizes, simply because they determine book-buyers' lists and make a substantial difference to authors’ sales; prizes, she says, are a necessary evil, because very few writers can make a living from their art.

Ian McGuire – novelist and lecturer – says there’s never a definitive answer as to why or how one book can be judged better than another; when assessing fiction, he says, all we can hope for is a clumsy and subtle attempt to sift until a winner emerges. The criteria for excellence aren’t hard and fast, but there is a hierarchy, and you can notice it. He goes on to talk about literary value and how we can find it – the influence of professional reviewers or critics and English departments has decreased lately, as online criticism and literary prizes have gained popularity. Critical theory isn’t as influential as it once was, and academia doesn’t, any more, have the language to assess what’s good. If literary values are still important, various voices need to be heard to contribute to the discussion, and the voices of the English departments aren’t as loud, any more, as they need to be. Returning to the Booker, McGuire adds that this year’s criterion of "readability" equates to a middlebrow shortlist.

John McAuliffe launches straight in with an attack on the quality of recent Booker winners – (Aravind Adiga, Kiran Desai, John Banville) compared to what he reckons were more worthy winners (Arundhati Roy, Salman Rushdie) back in the early days of the Prize. Now, he says, the Booker isn’t rewarding original voices, and he cited Patrick DeWitt’s The Sister Brothers as an example, saying that isn’t a patch on Kevin Barry’s City Of Bohane, which went unrecognised by the judges. The Booker’s a publicity machine geared towards the Christmas market, and the book-buyers’ focus on the shortlist means that other texts – Barry’s novel, as well as new works by Dermot Healy, Ali Smith and even former winner, Alan Hollinghurst – as good as vanish.

Prizes are given out, as Groarke said, by committee, and for less than encouraging reasons – it’s somebody’s turn because they’re old, because they wrote about tigers, because nobody violently disliked their book. He finishes by saying things aren’t as bleak for poetry – the Forward Prize and the TS Eliot Prize bear equal weight, and there’s a lively magazine culture that keeps literary debate alive.

Now the discussion’s thrown open to the floor: one person remarks that people might buy the prize-winners, but they might not actually read them – how do we know which books will stand the test of time? Vona Groarke replies that we’re lucky, really, if we get one remarkable book a decade, so if some prize-winners are less than admirable, that’s OK; responding again to Dame Rimington, she says, "What’s really readable is really good writing, Quality is readable, mediocrity is boring." Another audience member asks what will fill the gap, if literary criticism is in the doldrums; the panel talk about literary festivals, which allow for public, interactive literary criticism, and blogs, which contribute to the democratisation of criticism.

And that’s more or less that – an engaging debate, an informed audience and a blogger balancing a baby on her knee. But, you ask – the Booker winner? Well, it’s Julian Barnes, of course, with The Sense Of An Ending. As our panellists agreed, they were bound to hand it over – he is getting on in years.

Valerie O'Riordan is a Manchester-based writer, and she blogs at Not Exactly True.
Posted by MLF Blog at 5:45 PM