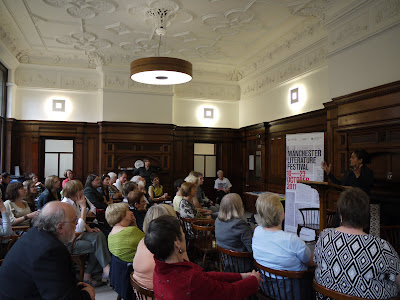 On the fifth calendar-day of the Manchester Literature Festival 2011, the city has once again proved itself worthy of showcasing the finest international talents of contemporary literati in playing host to the delightfully charming Swiss-Ghanian-Anglo author Marilyn Heward Mills, who was born in Basel, but raised in Ghana.

Being the first event of this year’s festival to be held in the Manchester City Library, everyone is appropriately welcomed by Libby Tempest of the library service, who echoes the sentiment of the eager audience – most of whom are freshly seated from looting an impressive lunch from Weightmans legal firm, laid out grandiosely for those who came – through saying, “What better way could we have to start than Marilyn Heward Mills?”

Even before the author begins to speak, one can sense a tangible feeling of affection towards Heward Mills. Towards the end of the event, it transpires that a number of the predominantly female audience present in the library’s Becker Room have shared many of the experiences discussed by Mills in her latest novel, and subject of her talk today, The Association Of Foreign Spouses.

Welcomed under a blanket of warm clapping (with directed enthusiasm coming from the aforementioned real "foreign spouses" that are present), Marilyn Heward Mills opens the hour of literary fare with two short readings from her novel. Representative of the issues raised in the book, and the calmly erudite discussion that will follow, the room is introduced to Eva. Suggested by Heward Mills to be the main character in the novel, the passage concerns Eva recalling how she first came to be in Ghana. Through this, we hear a fictionalised snippet from the life of a foreign, non-African lady living in Ghana, having moved to the country for the love of her husband.

Ending the reading, the author clarifies her choice of passage by offering a brief biographical portrait, in which she touches upon her reasons for wanting to become a novelist: “When I came to writing my first book, it was after many years of thinking I would like to write a story, when I was growing up in Ghana. I grew up in the 70s and 80s and it was a very turbulent time. There was very little by way of entertainment so a lot of my entertainment was really reading, and in the long gaps and the long holidays, there was a lot of time and opportunity for your imagination to run wild. When I look back now, I realise a lot of my time was spent in a fantasy world. When I came to writing a book, I realised that I was actually interested in writing about Ghana, and exploring the culture. And I think a lot of that is because my parents had raised me in a culturally neutral home.”

Her mother being Swiss, her father a Ghanian, what then follows is a discussion - led by Heward Mills - that analyses the intentions behind her meta-fictional work. She mentions how exploring and understanding conflicting cultures is her chief fascination. Poignantly, anecdotes from her own upbringing are offered; clashes between African and European customs at her father’s funeral are discussed with a smile and humour, building to further yarns concerning amusing differences that arise from engagements and cross-cultural marriages in Ghana, the jocular deficiencies of male Ghanaians, as well as fraught circumstances that arise from hosting and visiting foreign relatives.

Reading this, it will come as no surprise to guess that the central theme of this afternoon’s discussion is the dichotomy that arises when two mutually exclusive cultures collide. It is a conversation that the audience embraces with fervour. The final half hour is filled with enthusiastic questions, some of those present even recounting and sharing their own experiences, highlighting the pluralism offered from The Association Of Foreign Spouses, in that so many diverse experiences are mirrored in the novel.

In the end however, it is clear that at heart of the afternoon, and indeed Marilyn Heward Mills’ fiction, is the admiration she feels for her own mother. It is her mother’s journey - leaving Europe to face the unknown, in Ghana - that has encouraged Heward Mills to raise the important questions that form her work: how can one survive as "the other"; what encourages people to say in an "alien" land, and how people adapt to survive.

While many hands are still raised, the majority of people still pondering all they have learned about Ghana, one of the final questions, conveniently directing the pleasant and insightful discussion to its final close, is asked: “Where is home now?” To which Heward Mills responds: “Home is London, south east London. I think England is - I feel very at home here now.” For the audience, and those of us who enjoy reading fascinating insights into other countries, we are all thankful for this.

Richard Jackson is a PhD student interested in Central and Eastern European history, literature and culture. His blog, Lemberik, concerns the issues of minority populations in this region and he can be followed on Twitter via @lemberik.
Posted by MLF Blog at 3:51 PM