‘There’s More to Life than Books, You Know…’ 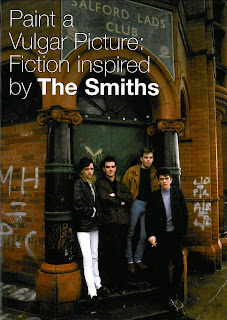 It used to be, when the NME was worth reading, that the NME letters page was a hotbed of debate. I say a hotbed of debate. Week to week, letters ran like posthumous dispatches from some raging frontline: on the one hand you had ‘those who would rise up to defend Morrissey from real and/or perceived slights’ and on the other you had… well, anyone else. That was largely how Morrissey fans saw the world – either you were with them or against them. And if you were against them, woe betide you! Talk about death by a thousand metaphysical slings and arrows.

Such exchanges were at the forefront of my mind when I started in on Paint a Vulgar Picture: Fiction inspired by The Smiths. I’d had a bit of a dusting up as a result of the first book in the series (Perverted by Language, which saw Fall frontman Mark E Smith tearing up copies of my book onstage) and the last thing I needed was hordes of Smiths fans camped outside my house telling me (in no uncertain terms) why my plan to have writers use Smiths song as the jumping off point for an anthology of short stories was not a wise one.

Still and all, it didn’t deter me. From time to time as the book came together, I’d poke my chubby nose around the door of various Smiths and Morrissey sites to see if news of the book had percolated their way yet (and once, just once, I glimpsed exactly what I expected, lots of youngsters saying ‘Oh’ and ‘Woe’ and ‘Whyever wouldst someone consider-est such a thing ast this?’). Conveniently, however, that was as bad as things got. On the whole, since the publication of the book, we’ve had nothing but goodwill. The fact that Paint a Vulgar Picture is an anthology comprising stories by a bunch of different people means that readers are unlikely to like everything (such is the nature of a compilation, right?) – but if they like a bunch of stories? Well, I’m happy…

As the reaction has been ‘quite’ to ‘very’ good, we’ve decided to sneak out from under the radar where we normally reside and do something of a night at Salford Lad’s Club as part of the inestimable Manchester Literature Festival. For £5 (or £3 concessions), you get the up and coming stylings of James Hopkins, the valiant home-town return of Jeff Noon, the blazing urban swish of Helen Walsh and the twisted suburban fantasies of the mighty Catherine O’Flynn. And what’s more, if you’re that way inclined, you can also treat yourself to one of the famous Manchester Music Tours, a two hour minibus tour that starts and ends at Salford Lad’s Club.

Between you and me, you’d be a fool to miss out on what will simply be the highlight of the Manchester literary calendar this year…

You can also incorporate one of the famous Manchester Music Tours into your visit. This 2 hour minibus tour will start from Salford Lads Club at 4.30pm and costs £10. To book a place please email mozbus@aol.com or call Phill on 0784344 6397.