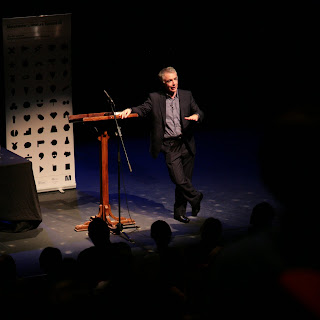 Eoin Colfer is a brave, brave man. Practically everyone in Britain loves the The Hitchhiker’s Guide to The Galaxy, and at some point in their lives formed a strong attachment to the five books of the late Douglas Adams’ trilogy, the BBC radio adaptations, or the recent feature film with that guy from The Office (oh, who am I kidding, nobody liked that movie.)

Incredibly beloved books don’t have a good track record when it comes to posthumous sequels. This particular gig becomes even less appealing when you consider that Adams killed off all the main characters at the end of Mostly Harmless. So why on earth would Colfer, a man with a wildly successful series of his own in Artemis Fowl, willingly step up to write what could potentially be The Wind Done Gone of Science Fiction?

He did it because he thought it would be fun, and a challenge. And because Adams’ wife and son asked him to, through Adams’ late agent, as the author candidly explained during the event. Colfer is a fine comedic writer by any measure, but he also comes with legions of 13-year-old boys devoted to Artemis Fowl. They wanted Colfer to introduce a new generation of 13-year-old boys to the Hitchhikers, by writing a book that they would enjoy as a standalone read, but presumably also might get them interested enough to add all five Adams books to their Christmas list. Hmmm. Is this all sounding a little bit like the whole thing originated in a marketing department somewhere? We’ll move swiftly on.

I haven’t read And Another Thing, and I have very little idea what it’s like. Naming a Vogon officer Constant Mown seems heavy-handed to me, not as gonzo nor as immediately convincing as, say, Prostetnic Jeltz. But that’s all I can say about the book, since Colfer read a single short scene involving a conversation between the two aforementioned Vogons. Anyone who came, like me, expecting a beefy book launch reading, one in which I could get a good sample of the writing and decide if I wanted to commit to actually reading the thing, left slightly puzzled.

But charmed all the same. It must be said that Colfer is a wonderful speaker. Unassuming, friendly, and very, very funny. He showed these qualities to their best advantage in the event, which was essentially a big Q&A. He told funny stories about writing the book; the best one was about how he quelled the fanboy naysayers online by joining a Facebook group of People Who Wanted to Stop Eoin Colfer Writing The Hitchhikers’ Sequel, as himself, and topping the members’ own horrendous lies about his own awfulness.

Kate Feld is the organiser of the Manchester Blog Awards and the editor of Rainy City Stories. She blogs at The Manchizzle.
Posted by MLF Blog at 1:05 PM