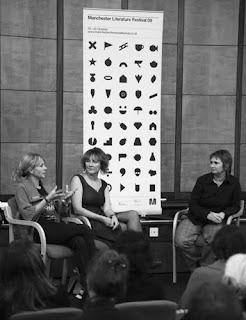 Friends Meeting House, home of the pacifist Quakers, seems at first glance to be a rather incongrous setting for two of Britain’s foremost novelists to discuss their latest novels, both of which are set around the time of World War One. In Jill Dawson's novel, The Great Lover she creates a picture of the poet Rupert Brooke which contrasts with the fictional voice of a seventeen year old maid, with whom he forms a relationship. Kate Mosse's new novel, The Winter Ghosts, is set just after the war and centres on a young man trying to come to terms with the loss of his older brother.

In fact, Friends Meeting House turned out to be an excellent venue, both in terms of being surprisingly capacious yet retaining a feeling of intimacy with the speakers, and also in its relationship to the subject matter of Mosse’s novel in particular, in which she tells us she was moved to write a novel about the huge loss of life in World War One and the difficulties facing young men in being allowed to grieve.

The two writers prove to be an interesting contrast to each other, both in terms of their writing and presentational styles – and even their choice of outfit, Dawson in a cocktail dress and Mosse in jeans! Mosse is vivacious and witty, distracting the audience from early problems with the microphone by loudly proclaiming that she wouldn’t be needing one and beginning her talk by complementing a lady on the front row on her footwear.

Jill Dawson breaks the ice by telling us how much she enjoys getting the chance to meet readers and find out how they have responded to her work. Her presentational style is more reserved but open, and hugely engaging. She gives us a spine-tingling reading of a section from the The Great Lover where the poet Rupert Brook and her fictional character Nell, kiss for the first time.

During the question and answer session, Dawson speaks of the extensive research which she had carried out into the life of Brooke including reading nine biographies, as well as letters and Brooke’s little known travel writings and even visiting Tahiti, where Brooke had spent some time before the war. She compares the voice which she has given Brooke to an “impressionistic painting” which, whilst not giving the true likeness of a photograph, could capture the true nature of the subject.

Historical research proves to be a real theme of the night, as Kate Mosse also speaks with passion about her desire to give a narrative to untold historical events and describes herself as a “pedant” when it comes to research. She told us of the many years she spent researching her books Labyrinthe and Sepulchre as well as The Winter Ghosts - and her determination to know as much as possible about the period she was writing about, even if she didn’t use all of the research in her books.

In response to a question asked by Festival Director Cathy Bolton, Mosse describes the differences between commercial fiction, in which she explained that “plot is everything”, and literary fiction, where the priority is the ideas and the way in which the story is told. As Mosse herself points out, this was an apt description of the contrasts between her own novels, where the plot is of central importance, and those of Dawson - who has also published poetry - with her beautiful and evocative use of language.

With Hilary Mantel winning the Booker Prize less than two weeks ago, Bolton is compelled to ask Mosse – who founded the Orange prize for women’s fiction as a reaction to all male Booker shortlists – if she felt that the Orange prize had influenced the shortlisting of other awards. Mosse is modest in her response, but tipped us off that she has written a piece for Saturday’s Guardian on this very subject! Dawson interjected and suggested that the Orange Prize had had a huge impact on the recognition of women in writing.

The evening is rounded off with an insight into the reading habits of successful authors. In response to an audience member’s question of what the authors themselves enjoy reading, Mosse revealed that she likes to read crime and thrillers, as the way in which they are put together is a “good lesson”. Perhaps unsurprisingly, she also enjoys military history, again giving us a reminder of her devotion to research.

Dawson on the other hand told us that, when writing a novel, she reads non-fiction relating to her subject matter, as she feels that she can’t “lose herself in someone else’s fictional world” when she is trying to create her own. With the critical praise heaped upon Dawson’s creation of Brooke’s voice, it is obviously a method which works well for her!

Kath Horwill was formerly Head of History at a large comprehensive in Bury. She writes the blog Parklover.
Posted by MLF Blog at 9:40 AM