An unprecedented audience with the Faber New Poets (October 19) 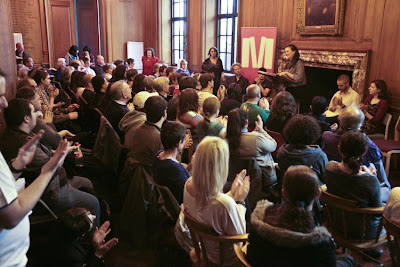 It's quite a crowd that squeezes into the curved, wood-panelled room inscribed, aptly, with the names of past Chairmen of the Cultural Committee. And as the four Faber New Poets take their seats at the front, they look ever so slightly caught in the headlamps at the sheer number that has turned out to hear them. Despite it being a Monday lunchtime, and despite these being rising stars not established ones, it's a full house and, rather than be turned away, a good number of onlookers choose to remain standing at the sidelines or crouching on the floor.

We're in the Central Library, to which Cultural Services Manager Libby Tempest now welcomes the guests and explains how it's something of a tradition for the venue to offer a platform for new literary talent. She promptly hands over to Faber & Faber Commissioning Editor, Matthew Hollis, who introduces the project and the people involved, namely: Toby Martinez de las Rivas, Fiona Benson, Jack Underwood and Heather Phillipson. He also explains the fifth person in the row: guest poet Emma Jones, who battles a runny nose to read from her most recent collection The Striped World.

Manchester is the last stop on the week-long Faber New Poets tour; an idea, says Hollis, that is 'perhaps more rock than poetry', but one that offers a great opportunity for the four young poets to showcase their work to new audiences. The 'roadshow' also aims to promote the foursome's newly published pamphlets of poems, launched to coincide with National Poetry Day a couple of weeks ago.

As well as the pamphlets, the Faber New Poets have received editorial input, a mentorship with the poet of their choice and a bursary to let them concentrate on their writing. This lucky lot are the first batch in the new initiative, which receives funding from the Arts Council and also marks the prestigious poetry press' 80th anniversary. One by one, the two boys and two girls step up to the lectern and recite five or six pieces each. There's quite a range of voices, and while some are stylistically and thematically grounded in the fairly traditional, some are more unusual, including the Scottish-accented Free Dialect Poem With Every Collection by the swaggeringly confident Toby Martinez de las Rivas, who is first up.

Fiona Benson follows, presenting a collection of nature-soaked poems delivered in a rather serious way and a 'fuck' that cuts like a knife. Next is Jack Underwood, the youngest and funniest with his between-poem banter and offering, Maths. Heather Phillipson comes last, baring her soul with talk of streaking round north London and serving up an ode to her favourite coat, stolen at a party.

The four round off proceedings by reading from each other's pamphlets: Toby from Heather's, Fiona from Toby's, Jack from Fiona's and Heather from Jack's. 'We've been together a long time and have got to know each other's poems, and we thought – this being the last day of the tour – it would be nice to choose and read each other's work,' says Toby. He's right – it gives the event further depth and shows how the four have grown together as writers.

Clare Conlon is a freelance writer, editor and press officer. Her blog, Words & Fixtures, has been shortlisted for the 2009 Manchester Blog Awards.
Posted by MLF Blog at 9:05 PM

diziizleyelim said...
This comment has been removed by a blog administrator.
December 17, 2009 at 8:45 PM