Is There A Novelist In The House? 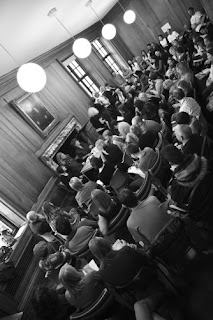 At the front, or rather the side for we are sitting along the length of Manchester Library's committee room, sit the three people who will answer today's all important question. Is There A Novelist In The House? I think it would be a safe guess to say that the majority of the audience, myself included, might be internally thinking "yes...me" for this event perhaps more than any other this fortnight has attracted writers as much as it has readers. And what a lot of us there are. It is a capacity crowd that face those three all important judges: Rebecca Swift from The Literary Consultancy, Cannongate's Dan Franklin and novelist Sherry Ashworth. They will decide which of six aspiring novelists will win today's prize - £250 and the chance for more extensive feedback on their work. Names were placed in a hat and the writers were called up to give their pitches.

First up was John Davenport. John's novel is set in the working class Manchester in the 1950s, where superstition allows the paranormal to loom large in the lives of everyone and a black Singer sewing machine found in an attic may mean the passport to a slightly easier existence. You can hear in John's work echoes of Roddy Doyle's skill with words and his ability to grasp humour in the grimmest of locations.

Gift Nyone is clearly no stranger to performing in front of a crowd. It takes him no time at all to have the audience gripped by the plot of his novel The Fourth Chimurenga. A Chimurenga is a revolutionary struggle, in this case his main protagonist's struggle against how the horrific experiences of his childhood will effect his life. Gift wants to be the African voice that is on the inside looking out as opposed to what he sees in contemporary African fiction: the voice of the outsider looking in.

The third pitch was by Marli Roode whose novel is part political thriller, part murder mystery. I have to admit that upon hearing this I became a little dismissive as this is not my type of book. Then Marli read an extract from her novel and I realised almost immediately that I was being an idiot. Marli can write. While her book might be part thriller it is all literature. Her prose is exquisite and her imagery incredibly memorable. A bright future beckons.

Someone else who would normally be able to give up the day job is Pauline Rowe if her day job wasn't being a published poet. Her novel The Confessions of Polly Malone tells the life of its heroine starting in a psychiatric ward and ending in resolution. The book is split into five segments, each dealing with different parts of her past that she must face. Again the extract she read from her book was highly impressive, particularly the image of a father dragging his daughter by her hair "in a way that, were it underwater, might have saved her life."

Last but one on the bill was Colette Snowden who read a short extract from her novel The Swimming Pool Diaries. The novel is an examination of the interior. Colette said she wanted the reader to be as familiar with the book's protagonist Marianne as they are with the sound that eating something makes in their own head while at the same time questioning who exactly Marianne was. Is she a fantasist? An actor? A manipulator? A victim?

The final novel was by Rachel Connor and it is set in a fundamentalist religious community cut off from society. Rachel uses polygamous society as a tool for examining ideas of desire and duty. The story is not told from one viewpoint but that of the husband and both of his wives who she thinks of as a knot of characters who are difficult to pick apart. The book also contrasts the community with the city that the young wife escapes to.

If there was one qualm with today's event it was that with the judges having already read extracts from the writer's works some of them chose to focus on presenting the synopsis of their novels and therefore didn't read from them. I personally would have loved to hear Gift and Rachel read their prose. However, that said, it was an excellent event which the audience clearly loved. It was a rare opportunity to see a new wave of novelists before they rolled onto the shores of the bookshops. The judges had a very difficult time picking a winner. The prize went to Marli Roode but anyone would have been a deserving champion. Was there a novelist in the house? I spotted at least six.


Benjamin Judge collects his thoughts on his blog Cynical Ben ( http://www.cynicalben.blogspot.com ) which has been shortlisted at this years Manchester Blog Awards. He also writes very short fiction at Carp Glob ( http://carpglob.blogspot.com )
Posted by MLF Blog at 5:23 PM