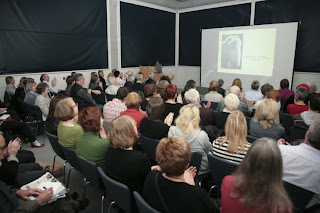 Take a minute. Sit back. Free your mind think of illustrated books. I suspect you are visualising such greats as Roald Dahl’s The BFG,illustrated by Quentin Blake, or Maurice Sendak’s soon-to-be-on-the-big-screen Where the Wild Things Are. Maybe even Beatrix Potter’s The Tale of Peter Rabbit. All those great images that have fed the imaginations of children for years past and will continue to do so for years into the future. Now how many of you sat back and conjured images featured in Bunyon’s The Pilgrim's Progress or Dickens’ Little Dorrit? A few perhaps, but on the whole probably not a lot of you.

Situated appropriately within the Manchester Art Gallery, I enter a room lit by a projected image of the Owl and the Pussy Cat as illustrated by Edward Lear. The crowd a typical gathering for a Friday lunch time, largely over 50 with a handful of students and a sprinkling of folk on their lunch hour, all chattering away illuminated by the projector's glow. A silence fell as Jenny Uglow, author of Words & Pictures: Writers, Artists and a Peculiarly British Tradition was introduced. She began her talk in a captivating and passionate manner, an all knowing figure on the subject of Words and Pictures.

“When a child reads a book they read the pictures not the words.” Jenny spoke of how when embarking upon this project she began, once again, to look at the images as she had as a child. To look into them not just at them. To read them. When you read a picture you are reading the mind of the artist, you are looking into another's imagination. This led to a few interesting points on the relationship between artist and author which Jenny proceeded to explore. How does an illustrator approach the text when they have never met the author? They can capture the mood exactly as it is written or they can offer a more personal interpretation. Uglow produced a series of beautiful illustrations to illuminate her point. William Blake’s illustrations of Milton’s Paradise Lost encapsulates the idea of personal interpretation perfectly. He captures a sexy Michelangelo-esque Milton, conjuring images of him as a hero, a revolutionary, a saviour, a great temptation, a sexual being, a Satan. She then contrasts this with other illustrations where it is quite possible that the artist had not even read the text, where the illustrations were a mere afterthought in the hope of attracting a few more readers.

It was interesting to discover past trends of collaboration between word and image, there is a direct mirror of how such relationships still work today. The great satirical campaigns of Hogarth and Feilding seemed to reflect some of the more manipulative use of text and image in the modern domain of advertising. Being a designer, I was thrilled to hear of the troubled relationship between the illustrator John Tenniel and the tremendous author Lewis Carroll. Carroll as a client was extremely rigorous in his brief for the illustration of Alice Through the Looking Glass. It seemed a painstaking task for Tenniel where every line was scrutinised and agonised over allowing little space for creative freedom. This is very much an issue in the world of design/illustration/commissioned art, you are hired for your creativity then denied the use of it. But then to the writer commissioning illustration is the realisation of piece. The collaboration between author and artist seems to be occasionally troubled but rewarding to all involved, especially to the reader.

Questions were put to Jenny regarding the modern focus of artwork on book covers. Her response was from the point of view of a publisher with an undertone of sympathy for the author. “Book covers are a marketing tool which the poor author has little control over.” It would seem Jenny’s expertise in illustration and text lay in a certain era when it was common practice to place images within books so she did not allude to any modern illustration which I felt was a shame as it would have rounded the talk off beautifully. But this is not her area of expertise. There was a cry of concern from the audience, a gent enquired as to how Uglow felt about a current trend of graphic novels bought by students. Students will go out and buy a dumbed down illustrated version of great philosophical text rather than read the original. Uglow commented on the increasingly visual world we live in, graphic novels seem such a great place to begin learning and far better than key notes, but then what a shame it would be to never read the original text. I am a culprit. I hung my head slightly as the question was posed. I have bought a graphic novel, well more of a biography, based on Kafka, illustrated by the great Robert Crumb, but I have also read and fallen in love with Kafka previously. I merely sought an accessible way of understanding his background. We then had a show of hands under Jenny’s instruction “Who here sees graphic novels as an issue?” we all look around, arms all stiffly by our sides. I grin slightly. I got away with that one.

With that show of hands, the talk was over. Everyone shuffled off to buy a copy of Uglow’s Words & Pictures: Writers, Artists and a Peculiarly British Tradition and have it signed. It was a shame that it didn’t last longer, I felt that she was just warming up, but I guess we’ll just have to buy the book if we want more for this passionate well-informed woman.

Afterwards I began thinking, perhaps we associate illustrations with children’s books because of the trend in modern publishing to exclude images from fiction. I personally had no idea of the great illustrations in Milton’s Paradise Lost that preceded my edition of the book. Saying that, collaborations still happen, such as the work between Ralph Steadman and the brilliant Hunter S Thompson. I recently came across a series of photographs included in the book The Lazarus Project by Aleksandar Hemon. Then there is a small Artist Bookmaking scene, where beautiful books are produced with equal focus on the text and the images, the book itself (typically self published) becoming a work of art. I wonder if this could be the future of word and image.

Walking away from the museum I began to look around, our modern landscape is saturated with images, with copy telling us how to live, advertisements, propaganda, magazines, perhaps this is the new generation of word and pictures. It seems that the illustration of text is everywhere we look, yet there is no nicer form of escapism than reading a good book whose words are married to its pictures. Next time you come across one, be sure to read the pictures just as thoroughly as you read the text, you never know what is hiding within them.