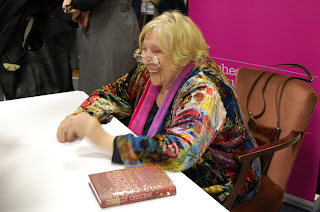 Three quarters of an hour after Fay Weldon was due to appear, the by now understandably twitchy festival folk finally announce: 'Fay Weldon is in the building!' Cheers and applause fill the vast but spartan main hall of the Friends Meeting House, and it no longer matters that Weldon is late (held up from Dorset by Friday afternoon motorway accidents and a wayward GPS): you couldn't stay mad for long with such a charming woman.

So it's off the road and straight on stage for the cheerful 78 year old; a riot of colour in a diaphanous fuchsia scarf and velvet jacket all golds, reds, pinks and greens. She makes her apologies – 'I'm never late. Well, only once before, about 15 years ago, but there was a free bar and everyone was so drunk, they didn't notice!' – then, half-moon glasses perched on her nose, squints down at the text to read from her latest novel, Chalcot Crescent. Her breathless delivery may be a result of all the rushing about she's been doing, but once she's sat down and in discussion with Kaye Mitchell of The University Of Manchester, she does seem a lot calmer.

Indeed, as she fields questions about characterisation (Chalcot Crescent's Frances is the sister she never had, and who she has even pretended to be on occasions), feminist literature (from Iris Murdoch to Germaine Greer) and unreliable narrators, the storyteller in Weldon really takes over. Frequently, she wanders off on a tangent, weaving in tales of adventures (such as being invited to the World Intellectuals' Conference in Moscow in 1989 when Mikhail Gorbachev announced that the Cold War was at an end – Weldon promptly informed the Foreign Office; they didn't believe her), before eventually heading back on track and returning to the original point. Hers is a keen mind, this much is clear.

Weldon's interest is certainly piqued by serious issues, and Chalcot Crescent addresses subjects such as mind control (even if it is through modified meat loaf), a totalitarian government and the economy. 'I studied economics, not English literature,' she says, by way of explanation. Her career, too, extends beyond just (!) the 29 novels she has put out since 1967. She has written plays, screenplays, autobiography, essays, journalism and, perhaps most famously, advertisements, having worked as a copywriter to support her first son when she was a single mother back in the fifties. She does admit, however, while chuckling: 'I do find writing non-fiction a bit trying.'

On being a novelist, she says: 'Writers aren't taken seriously – not in Britain, I mean; in Europe and the rest of the world.' She also laments, while at the same time jokes: 'I have a terrible feeling that the good times for writers have gone – but at least they were good while they lasted!' When questions are opened up to the floor, a worried student queries this pessimistic prognosis, and Weldon, ever warm and reassuring, replies, 'I teach creative writing at Brunel. Writing is still used to pass on enthusiasm and excitement, warning and so on. But it may be the end of the traditional novel.' To be a successful writer, she also divulges, it's handy if you're the odd one out. Born in England, she then spent her early years in New Zealand before returning to the UK aged 14. 'I never really belonged,' she explains, 'but an outsider is a very useful thing for a writer to be. Patterns of absurdity become one's natural subjects, so the dystopia is there... but it doesn't mean you can't have a laugh!'

Clare Conlon is a freelance writer, editor and press officer. Her blog, Words & Fixtures, is shortlisted for the 2009 Manchester Blog Awards.
Posted by MLF Blog at 3:42 PM