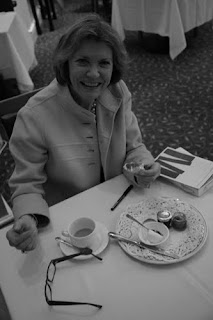 The French restaurant in The Midland Hotel is a fitting setting for Dame Joan Bakewell to discuss her first novel, All The Nice Girls. With fleur-de-lys wallpaper, luxurious chandeliers and ornate rugs, the place, like the erudite speaker widely known for being one of the first female TV journalists in the UK, oozes sophistication. And watching over proceedings, aptly, is a portrait of Madame de la Sabliere; a woman revered across 17th-century Europe for her own great learning and scholarly pursuit.

Self-styled ‘voice of older people’ and recently seen defending older women newsreaders, Bakewell – smiling and resplendent in a yellow-buttoned jacket, black shawl and grey trousers – starts by explaining her reasons for only just getting round to writing her first novel, at the age of 76. 'It’s revenge on my English teacher,' she says, detailing her love of literature as a teenager and telling how 'I yearned to be a writer' – until the teachers at Stockport High School For Girls told her it was 'a daft idea'. This draws laughter from the audience, many of whom are from a similar generation. So, instead of becoming a writer, Bakewell went on to study economics, then history, before becoming a journalist. She confides that young people should have their creativity and imagination fostered, so that the notion of being a writer is not dismissed from their minds. 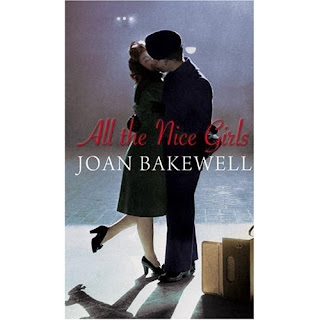 Bakewell now turns to the roots of All The Nice Girls, the idea for which developed when she was in her attic rummaging through her old belongings. First, she happened upon some love letters from her adolescent years, exclaiming, 'Gosh! Love letters are boring!', and imparting to us that the reason for this is the repetition of the word 'love' in such notes. More importantly, however, she discovered some documents relating to the British Ship Adoption Society during World War II from when her school had 'adopted' a ship.

This got her thinking how there must have been 'undercurrents in this story', more than meets the eye, so she set about looking into the background of the Ship Adoption Society at the National Maritime Museum, perusing documents that seemed untouched for eons: 'Dust all over them and bound by strings'. Following her journalistic instincts, she did as much research as she could, visiting the Western Approaches Museum in Liverpool to swot up on the essential details needed to write historical fiction and leaving with the decision: 'I'm going to make one of my characters a Wren!' Bakewell says she was so enraptured by what she had learned about the women serving in the Women’s Royal Naval Service that she wanted to convey a story from their perspective. She also became interested in the British mercantile fleet and the threat from German U-boats to merchant seamen in the Atlantic, and this comes across in the novel's tangible ominous feeling. As if to prove she really has done her homework, Bakewell sets about reeling off statistics about WWII before reading two excerpts from All The Nice Girls. The first passage is the moment the headmistress announces that 'the school is going to adopt a ship'; the second is the poignant moment when the ship’s captain and the school’s headmistress meet, right here in The Midland.

Next, Bakewell discusses the dialogue in the novel and explains how she found the language used by sailors in WWII slightly difficult to grasp, joking: 'I’m English of course, but all the colloquialisms!' Indeed, one maritime historian she spoke to apparently even said, 'They won’t let you publish that!' Having been a youngster in the era during which All The Nice Girls is set was an advantage, says Bakewell, and she also drew on the memories of others who lived through the war. She compares this to Hilary Mantel's Man Booker Prize winner Wolf Hall, which is set almost 500 years before All The Nice Girls. Bakewell admits she 'copied the best!' in terms of small details, and laughter ensues.

Bakewell has held the audience’s attention throughout the afternoon; not even the din of crockery being thrown about in an adjacent room distracted anyone. And as she wraps up the talk to indulge in some fresh tea and scones, she is still enthusing about writing: 'I hope it proves infectious.'

Mohsin Iqbal is a freelance tech writer and blogger. Read his blog Sabres Length At Peterloo here.
Posted by MLF Blog at 4:12 PM

diziizleyelim said...
This comment has been removed by a blog administrator.
December 17, 2009 at 8:44 PM