Out of the darkness comes enlightenment through Michael Schmidt's poetry 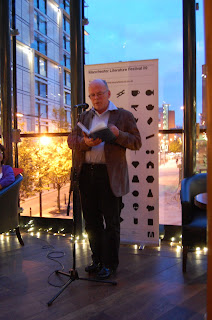 All glass, metal, wood and exposed brickwork, with twinkling lights and background jazz, the Epernay Champagne & Cocktail Bar is a suitably urbane setting for the launch of Michael Schmidt's Collected Poems. There's a hum of Saturday-evening chatter from the other end of the establishment, as this side of the bar hushes, all eyes facing front.

After an effusive introduction by his editor and 'dear, dear friend' Peter Sansom, Schmidt takes to the floor and begins reading from the new collection, starting with his earlier work, including 'From Mexico' and 'A Dream', and moving on towards the here and now. In dark trousers and a light blue open-collared shirt, his attention to detail is obvious in his super shiny shoes, while his warmth comes across through his soft, grey corduroy jacket and round smiling face.

But his body is betraying him and the butterflies are perceptible, despite having a lengthy career behind him (his first collection, Black Buildings, was published in 1969, when he also started up Carcanet Press) and even though he holds the post of Professor Of Poetry at the University of Glasgow. His left leg is jiggling, and he shifts the tome from one hand to the other as he reads aloud from it. Some of the words get muddled, and his delivery, in his smooth Scottish-cum-American accent, is ever so slightly stilted.

Then we realise why: this usually confident man can't actually see the text in the failing light! 'I'm sorry if I'm holding my book in a funny way,' he explains. 'It's because there's a street light casting a certain light.' He is handed (what else?) a candle in a champagne bottle, but the hot wax drips inconveniently, and a kind soul steps forward with a torch. The effect is rather like reading under the covers as a child, and it adds to the intimate feeling of the event. He struggles on, but eventually gives in: 'I'm sorry, my eyes are going out now.' It's as good a time as any to take a break, he says, 'while I organise some better illumination'.

Despite the difficulties, Schmidt is very engaging, and frequently raises a laugh as he explains his poems. I mention the obvious warmth that emanates from him to some of his fans and fellow poets in the interval, and am met with enthusiastic nods all round. As the second half gets under way, the well-turned-out turnout (not everyone manages to get a seat) hangs on his every word, heads reverently tilted to one side. Schmidt, you can tell, does enjoy the devotion despite his jangling nerves, and treats those congregated to some 'poems that have come most recently': firstly 'Desire', chockablock with boat metaphors, and another ('I'll just do one more as my battery is running low'), based around Shakespeare's Yorick; one of a number referencing fellow writers.

As he switches off the torch and steps away from the mic, Schmidt looks visibly relieved that the 'most extraordinary launch event ever' is over. But sometimes it's nice to see people in a new light.

Clare Conlon is a freelance writer, editor and press officer. Her blog, Words & Fixtures, is shortlisted for the 2009 Manchester Blog Awards.
Posted by MLF Blog at 7:02 PM