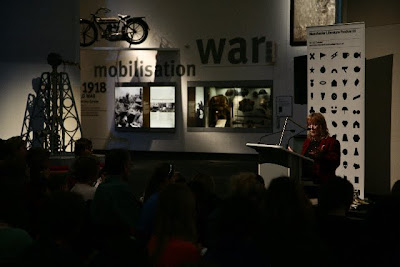 Fans of Michelle Magorian gather this evening in the cafe of the Imperial War Museum , in anticipation of hearing the author talk about her 1940’s–based children’s books. When the daytime visitors to this popular attraction have left the building, we are ushered up to the atmospheric exhibition area to take our seats. The next hour sees us enoying a dramatic performance, history lesson, and insight into the writing process of an award winning writer, all rolled into one.

If anyone was unaware that Magorian is an actress as well as author, this would become obvious as she read her first extract, from her book Back Home. She tells the story through the eyes of Rusty, a young girl returning to war-torn England after spending 5 years in the USA. Rusty responds to explanations of her new boarding school uniform including bloomers, girdles and flannel pyjamas in much the same way as one of Magorians modern young readers might – she is as unfamiliar with 1940’s Britain as they are.

We are then given a series of readings as Magorian explains that each of her novels has been triggered by someting in a previous one. For example, Back Home was inspired by a picture she found when conducting research for Goodnight Mister Tom of young children waving from the deck of a liner. She didn’t have time to conduct research at the time, but felt compelled to go back to it later and write a novel based on the experiences of these youngsters. Cuckoo in the Nest was then inspired by a director who told her the story of his own wartime experiences, and then A Spoonful of Jam continued the story of Elsie, a character from Cuckoo in the Nest! Magorian later divulges that her latest book will tell the story of a character in A Spoonful of Jam some years later and will represent a minor departure, given that it will be set in the 1950’s.

It is clear during the evening that Magorian has an incredibly lively mind, both from her explanations of how her stories continually trigger new tales which she has to come back to, and in her descriptions of how some of her characters “appear” in her mind. She tells us that her Costa Children’s Book Prize-winning novel Just Henry was triggered by a picture of a cinema which came into her head at 3am.

One might wonder then, how Magorian came up with the idea for her first novel Goodnight Mister Tom, with no previous novels to be inspired by? Again, Magorian explains the train of thought leading to this much loved classic. She was appearing in Joseph and his Amazing Technicolour Dreamcoat and was trying to find a catalyst for a series of short stories. The colours of the dreamcoat became her inspiration, and the first pair of colours she chose to write about were green and brown. Into her head popped a boy standing in a graveyard wearing a label – he became William Beech and the short story was about his first day as an evacuee. When the short stories were finished, she returned to William and Tom, the old man who takes him in, and conducted further research into the experiences of evacuees. The result was Goodnight Mister Tom.

There are many questions for the author at the end of her talk, reflecting the affection in which the audience hold her writing. She is quite sure that her background as an actress plays a key role in her ability to make her characters so authentic. She is used to getting into the head of a character and looking at the world through their eyes . She also shares with us that she has to take frequent breaks when writing unpleasant scenes because she finds them upsetting . It seems clear that her own response to her plots and characters demonstrate why she is able to make her audience believe in her characters and feel affected by their experiences, both good and bad.

A queue quickly forms at the end of the evening, with audience members keen to get their favourite books signed. Magorian should have a new book out next year - but which parts of previous stories will trigger ideas for new plots after that? What kind of scenes and characters will appear in Magorian’s mind at 3 in the morning? Or perhaps she will make a return to acting? Wherever her train of thought takes her in the future, it is sure to be gripping and engaging!
__


Kath Horwill was formerly Head of History at a large comprehensive. She writes the blog Parklover.
Posted by MLF Blog at 10:22 AM