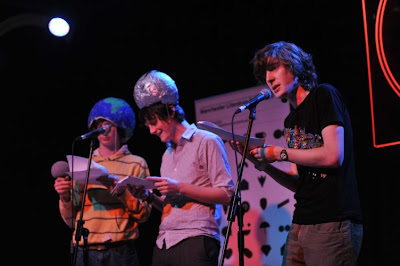 It's Wednesday night and time for the long-awaited and much-Twittered-about glittering prize-giving ceremony of the 2009 Manchester Blog Awards, held in conjunction with the Manchester Literature Festival, Arts Council England, Manchester Digital Development Agency (MDDA) and creativetourist.com.

The show is being held in the newly spruced Band On The Wall, where the tables, set out cabaret club style, soon fill up with the brightest and best from Manchester's burgeoning social media scene. The soundtrack is provided by the reborn (for one night only!) Bloggerpalooza mp3 bloggers, while compere for the soiree is self-proclaimed Manchester media princess Maria Ruban, squeezed into a very tight, very red dress and hitting something of an impasse trying to extract catchphrases from a rather unforthcoming audience. Various shortlisted bloggers present their favourite posts, including Emily Morris of My Shitty Twenties, Dave Hartley of Dave Hartley's Weblog and Katherine Woodfine of Follow The Yellow Brick Road, while author and judge Jenn Ashworth also reads an extract of her work.

Eventually, it's prize-giving time and the mic is handed over to Manchester Blog Awards organiser Kate Feld, who came up with the idea for the event in 2006 'in response to the growing numbers of writers, artists and photographers in the city who use blogs to publish their work online'. Kate expresses her delight at the record number of entries this year (topping 200) and explains that the panel of judges included (as well as her good self): author and columnist of The Guardian Naomi Alderman; Dave Carter, head of MDDA; Richard Fair of BBC Manchester; Mike Noon of Arts Council England North West, and author (and last year's winner of the Best Writing On A Blog category) Jenn Ashworth.
So, without further ado, here's the list of (and links to) the winners and runners-up at the 2009 Manchester Blog Awards. Drum roll, please...

Best City and Neighbourhood Blog: Lost in Manchester (anonymous). One of the judges said: 'Sometimes it's easy to forget to look at what's right under your nose. I love its unashamed raw passion for Manchester.'
Runner-up was The Manchester Zedders (Liam Purcell and Marie Pattison).

Best New Blog: Words & Fixtures (Clare Conlon). One of the judges said: 'It was the only blog out of the twenty-four shortlisted that made me laugh out loud.'
Runner-up was Songs From Under the Floorboards (Andy Wake).

Best Writing On A Blog: My Shitty Twenties (Emily Morris again). One of the judges said: 'It's almost impossible not to get drawn into the story that this blog tells.'
Dual runners-up were I Thought I Told You To Wait in the Car (Richard Vivmeister Hirst) and Dave Hartley's Weblog (Dave Hartley).

Best Arts And Culture Blog, sponsored by creativetourist.com: Run Paint Run Run (Ella Wredenfors). One of the judges said: 'Opinionated, heartfelt and pleasantly rough-around-the-edges, a blog with an infectious enthusiasm for art.'
Runner-up was The Manchester Hermit (Ansuman Biswas).

Blog Of The Year: Lost in Manchester (still anonymous). This was awarded to the blog with the highest aggregate score in the competition. One of the judges said: 'Quirky, original and focused, with an eye for detail. Putting the extra into extraordinary.'

Well done to everyone involved, and long may the tradition continue!

Photo by Brian Slater
Posted by MLF Blog at 12:28 PM