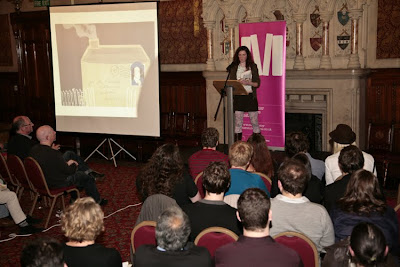 Six by Six is a collaborative project between MMU Cheshire’s creative writing and Stockport University’s illustration courses. The result is a self-published zine modestly held together by a staple.

Collaboration between author and illustrator is no new thing, but it's not so often that two schools within a university cross over and work together, let alone two separate universities. No doubt both illustrator and author were slightly apprehensive about the venture; The illustrator coming face to face with their first client, visions of a demanding author unwilling to give the illustrator creative freedom, and wanting complete control. The writers fearing to place their babies into the arms of a wayward illustrator who will perceive things incorrectly or take the visuals too far. But the collaborations worked and that is why I find myself here, in the grand setting of Manchester’s Town Hall. It was my first visit and I was immediately filled with awe and emotion which I had never previously felt for a building. The architecture set my expectations high.

A glass of wine grounded my emotions and I sat before a slideshow projection of the illustrations featured within the zine. It was a shame to see that the room was not full, a small gathering of mostly students. Fortunately, like most student events, there was free wine to relax everyone into the evening. I felt like climbing to the tip of the Town Hall’s clock and calling “Come on Manchester, show your support! These kids are your creative future.” But I didn’t drink enough wine to do that.

Both authors and illustrators approached the microphone to speak about their work, for a lot of them this seemed to be their first experience of public speaking. It is always a daunting task but, despite the odd hunched over figure reading into their chests, the majority spoke confidently and clearly. I was seduced by the voice of one particular young man who read about war, his tone was soothing and spaced, if his career in fiction did not take off I am sure he will make his million reading audio books!

Each author read a short extract of their work and were asked questions regarding their approach to writing and their feelings towards collaboration.The illustrators fit the stereotype: They gave modest responses to questions posed to them by the creative writing course leader (who acted confidently as host for the evening). I was interested to see the variety of collage and vectorised illustrations skillfully accomplished with the aid of a computer and Adobe Creative Suite. Yet I was slightly disappointed by the lack of hand rendered illustration given the rising trend in hand made craft, and fragile drawings. However this does not dampen their talent and ability as illustrators.

The event was slightly clumsily put together but this can be put down to the inexperience of the organisers. Illustrations flickered on the white sheet-like screens, not quite appropriate to the fiction being read. The microphone popped and cackled as it was placed in and out of the stand. But it all added to the charm of the evening, along with these fresh-faced and nervous beings about to embark on their careers as a creative. All in all the students showed great potential.

As I entered the stairwell I was once again struck with awe. Vast arches, intricate design detail that becomes lost and found. The architecture seemed to represent endless possiblities, not only for these students, but for all of Manchester’s creative students. All of whom will one day go on to form their own part of the beatutiful and complex architecture of Manchester’s creative industry. Another thing for our city to be proud of.

Mandi Goodier is a graphic designer and artist bookmaker.
www.stickittothemand.blogspot.com
www.mandgoodier.co.uk
Posted by MLF Blog at 9:58 AM