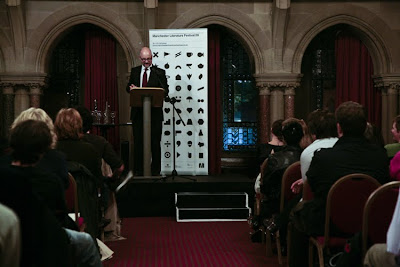 The first Manchester Fiction Prize kicks off with a pop as the champagne is uncorked at the gala reception this Friday night. Already there's a buzz of excitement and anticipation filling the immense Town Hall room where the six shortlisted writers and their guests are gathered.

Once the statutory group photos have been taken, we make our way to the plush Lord Mayor's Parlour up the corridor. Here James Draper of Manchester Metropolitan University's Writing School fills us in on the background to The Manchester Fiction Prize and its umbrella award, the Manchester Writing Competition. The brainchild of Carol Ann Duffy, Creative Director at The Writing School when she's not busy being Poet Laureate (which she is tonight), the Manchester Writing Competition alternates annually between poetry and fiction, and aims to celebrate excellence in creative writing and act as a launchpad for up-and-coming writers. It's open to new and established writers internationally, with £10,000 awarded to overall winner and a bursary for study at MMU awarded to an entrant aged 18 to 25 as part of the Jeffrey Wainwright Manchester Young Writer Of The Year Award.

The first-ever Fiction Prize received a staggering 1,700 entries and, reveals Draper, 'Collectively the stories contained four million words, more words than the Bible – I know because I counted them!' The submissions (all brand-new short stories of no more than 5,000 words in length) were judged by novelists and short story writers M. John Harrison, Sarah Hall and The Writing School's Nicholas Royle (these last two both read examples of their work: Hall gives us The Agency; Royle presents Very Shortly), who whittled them down, first to an 'unofficial long list' of 30 or 40, then to the final six.

So, in alphabetical order, each of the six shortlisted writers takes to the stage and reads from their entries (full stories will be published on the Manchester Writing Competition site). First up is Peter Deadman, with a touching childhood tale of swimming, cycling and communism during the long summer holidays. Next, 24-year-old Michael E. Halmshaw reads from They Cover Him With Leaves, a dark but funny description of two immigrants, Petrov and 'Frank'. Edinburgh-based Vicki Jarrett's story of 'mental cases' in a chippy is a definite page-turner, while the ultra-confident Toby Litt (pictured), author of a clutch of novels including Adventures In Capitalism, gives us a very well written but rather offensive piece called John And John. Australian author Jennifer Mills couldn't be with us, but her brother, Alex Mills, reads from Prospect, her intriguing study of rising rain waters in the New Mexican desert, and last up is Alison Moore, who presents the sad demise of married couple Dorothy and Wilfrid in Static.

Hall and Royle step forward again (Harrison is unfortunately ill and has been unable to attend), envelopes at the ready. 'Judging this competition has been very hard work, but enormous fun and enormously inspiring,' says Hall. 'The short story is one of the most exacting forms of writing and the stories on the shortlist are all wonderful examples of this form. The judges' decision was very difficult.' She announces the winner of the Young Writer Of The Year Award as Michael E. Halmshaw then reveals the winner of the Manchester Fiction Prize 2009 to be Toby Litt. Neither comes as a big surprise, although all the work presented tonight has been interesting enough to warrant a full read.

diziizleyelim said...
This comment has been removed by a blog administrator.
December 17, 2009 at 8:44 PM