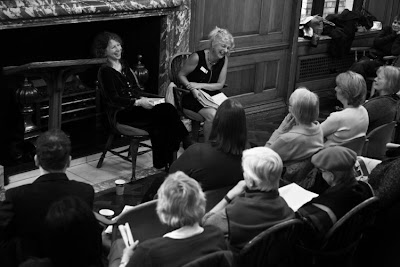 The wood-panelled Committee Room at the Central Library has been the venue for many of the events that the Manchester Literature encompasses and today (21 October) it is brimming with people as it plays host to biographer Claire Harman. Professor Of Creative Writing at New York's Columbia University, she is also the author of Jane’s Fame, her latest book, which looks into the life and work of Jane Austen and which Libby Tempest, Cultural Services Manager at the Library, describes as 'part biography, part cultural history'.

After outlining Claire Harman’s achievements, Libby goes on to ask the author a number of questions about Jane's Fame and Jane Austen, one of the undisputed literary greats. Claire, elegantly dressed in a velvet jacket, answers every question wittily, even throwing in jokes from the book for good measure.

Libby asks Claire about the attitudes of Jane Austen’s family, specifically her siblings, to her writing. 'I have no intention of demonising them,' Claire replies, asserting that Jane’s father, George Austen, had gone to great lengths to solicit publishers to peruse his daughter's work and, hopefully, to print it, although one of his letters 'was subsequently sent back with “declined by return of post” written on it'. The issue of family was naturally of great importance to Jane, says Claire, explaining that one of Jane’s older brothers was also involved in literature and was a poet. 'That said, families are queer things, aren’t they?', she laughs.

Libby inquires about the mind-set of Jane’s peers and of book clubs in the 18th century, and Claire tells how Jane zealously kept notes on what her friends or indeed anyone thought of her and her novels, even those with a negative view. 'A particular one was “Pride And Prejudice was bearable”, which she kept in the spirit of satire.' Claire explains that this was a typical view of the very snobbish people in book clubs of the day.

Moving on to her treatment, I am not surprised at the intensity of research done by Claire, as she somberly describes how Jane 'was often gawked at' and eclipsed by her brothers. Claire describes, animatedly, how Jane got a small measure of retribution from being an author as people began to become tentative around her, thinking they would be portrayed as a character in one of her novels: 'She was described as "a poker of whom everybody is afraid".' A few members of the audience show a smile at these words.

'Completely transparent. There is no complexity and she’s an author everyone can read.' This is Claire's answer to Libby’s question on the readability of Jane Austen and the breadth of her appeal. Claire goes on: 'Her novels exist in a temporal vacuum and there is a timeless quality.' Part of this, Claire goes on to explain, is down to the lack of any sort of political storylines, nor mention of the Napoleonic wars or French Revolution, along with her ability to focus solely on the families and plots in her novels. This 'intricate prose influences the reader' believes Claire.

There is something of an air of anticipation as Libby asks her last question, which inevitably is about the modern adaptations of Jane Austen's novels. Claire grins widely as she mentions Colin Firth and the BBC adaptation of Pride And Prejudice, before reinforcing Libby’s view that the quality of acting in today’s age of adaptations was almost secondary to the ‘fix’ of watching one, and how the public seems to have an almost insatiable appetite for more Jane Austen adaptations. 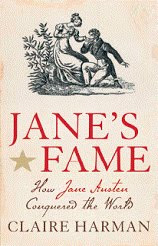 Claire now stands at the podium and reads one of the last chapters of her book. She chats about scholarly criticism and of how Jane’s books were unpublished for 20 years after her death, then moves on to discuss the genres that Jane Austen’s novels encapsulate: the romance and typical storyline of 'boy meets girl', and the very masculine features of the ‘hero’ in her novels, reeling off a whole bunch of jokes and making the audience laugh. Her last portion of the extract deals mainly with the subject of sexuality, and she talks in depth about the supposed lack of it.

As Libby brings the event to a close, I feel Claire has illustrated a great deal about the writing of Jane Austen and there was a sense around the room that some of the audience members have indeed had their ‘fix’ of Jane Austen for the day.