A Dignified Occasion: Words on Dignity, in support of Amnesty International 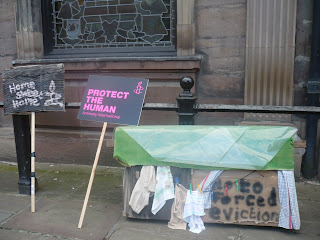 Saturday 17 October was International Day for the Eradication of Poverty, and the Words on Dignity event organised by and in support of Amnesty International, served as a sobering reminder of the horrific inequalities and suffering faced by many people around the world. However, it was also a reminder of the power of the written and spoken word to provoke emotion and – hopefully – action.

St Annes Church provides a very central and visually beautiful venue for an hour of inspiring readings of poetry and prose, on a range of themes relating to Amnesty’s “Demand Dignity” campaign. We are given an introduction to the event by Manchester’s Lord Mayor, councillor Alison Firth, who has been a member of Amnesty International for 25 years. She then introduces our host, John Amaechi. We were given an information sheet about Amaechi when we arrived and he certainly has a fascinating background. There can’t be many ex-professional sports stars who go on to combine a career in sports commentary with pursuing a PhD in psychology and being an Ambassador for Amnesty International!

During an hour which passes remarkably quickly, Amaechi gives us a brief explanation of the context of each group of readings and how they relate to Amnesty’s campaigns. We are given horrendous statistics on child poverty and the disproportionate number of women in poverty around the world. In between Amaechi’s succinct and sobering explanations, we listen to readings from Amina Latimer, a member of World Wide Workshop, the Royal Exchange Theatre’s Refugee Theatre Company, Ayesha Gwilt, an actress who has starred in the TV series All the Small Things and who is a member of the Contact Theatre’s board, and Wyllie Longmore, an eminent actor and teacher.

Some of the readings are harrowing. Wyllie Longmore has the audience hanging on every chilling word of his extract from Khaled Hosseini’s A Thousand Splendid Suns, set in Afghanistan. Even those of us who have never read the book could grimly anticipate the awful conclusion of the account of a mother forced to attend an underfunded hospital and being told she would have to have a caesarian without anaesthetic, or risk the loss of her baby. And yet when Longmore utters the closing words, the shock from the audience is palpable.

There are moments of despair, Ayesha Gwilt’s heartfelt reading of What Happens by Erich Fried, who was exiled from Nazi Germany, reminds us of the inaction which so many of us are guilty of, in a world where people suffer prejudice and hatred all around us.

Humour, too, is on the agenda. There is laughter around the church as Wyllie Longmore reads the poem 'Half Caste' by John Agard; a powerful, and at times funny, demonstration of the insulting effect of disrespectful language.

Finally there is hope and inspiration. John Amaechi gives us the background to 'Revenge', by Nicaraguan singer songwriter Luis Enrique Mejia Godoy. Godoy based 'Revenge' on the words of Tomas Borge who, when asked by a court to name his punishment for his torturers said,

“My punishment is to forgive you.”

Amaechi concludes by reflecting on “the power of words to connect our hearts and minds to the lives of people much less fortunate than ourselves” and expresses his hope that we will leave St Annes Church a little more inspired and encouraged. It would be difficult not to be inspired by the dignified words we have listened to this afternoon.

Kath Horwill was formerly Head of History at a large comprehensive in Bury. She writes the blog Parklover.
Posted by MLF Blog at 5:33 PM